The Magic of Poetry: The Age of Magic by Ben Okri 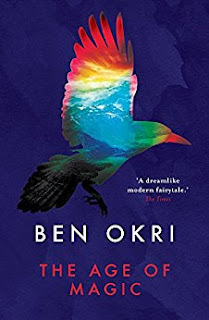 On their way from Paris to Basel to film a documentary about Arcadia, an imaginary land considered the classical epithome of the perfect co-existence between humans and nature, the 8 members of the film crew are going through dreamlike spiritual experiences. Their inspiration for searching and finding new depths into the concept of Arcadia is stimulated by their stay for 3 days and two nights at a hotel near the Swiss Regi mountain, whose mysterious reflection into the lake is a source of tremendous inspiration.
But inspiration is supposed to be a gift and a poison, and the search for Arcadia means also pushing the limits of creation, which is always a dramatic challenge for the being. Wrapped in an ambiance of dream, some of the conversations remind of some mild variants of the Platonic dialogues. Most of the discussions are though fragments of dreams: '(...) there are some conversations so strange that they are only remembered much later, but not noticed at the time'.
As a reader, you often feel in the middle of a cocoon, where you go back and forth, looking for your own sense of life and humanity, or just being left out of a dream. At the end of the prose poem, each of the characters is taking the chance of a change and the opportunity of a metamorphosis; 'Standing on the shore, they sensed a syllabe streaming through all things. They heard the sustaining hum which seemed to originate in the depths of their hearts and in the farthes reaches of space. The hum washed through them and sweetened the taste of life'.
The text flows smoothly, like the background music of the meditation soundtrack. For me, reading this book was like a journey through the deep meanings and dream textures. A recommended read when you long for a creative touch for switching life paths.