Jerusalem Ablaze: 13 Short stories with a taste of darkness 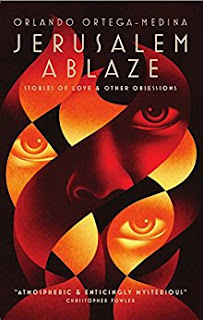 A collection of 13 short stories of different lengths, the debut of Orlando Ortega-Medina, Jerusalem Ablaze is an exploration into the darkest labyrinths of the mind and the soul. Introduced as 'stories of love and other obsessions', each story is an emotional roller coaster, which brings you Tokyo's Ginza to the Israel's Masada,  alongside with people on a journey to their inner self and dark sides.
Although a debut, the book is written in a style mature enough to reveal admirably hidden feelings, secret desires and a cultivated ambiguity of the being. You will encounter people searching for their own self or who already found it and are scared enough to show it to the world. People with strange and maybe too many identities and confused feelings, lonely in their unicity and difference. A big role in the emotional investigation pursued in each of the 13 novels is played by the sharp dialogues which compliment the equally well-crafted descriptions.
Very often, I felt I am part of an adventure set in the art of the Japanese masters of writings and it is no wonder as the author himself recognize his admiration for the mysterious Mishima Yukio. But the discussion on influenes is not so relevant, as long as the writer's style reveals to be unique despite all the literary references that can be identified in the stories. This is the case of Orlando Ortega-Medina, which promises even greater writing achievements in his next endeavours that I am curious to know and especially read about.

Posted by WildWritingLife at 15 September