What I Didn't Like about The Lubetkin Legacy, by Marina Lewycka 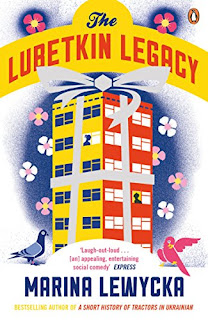 After completely disliking The Short History of Tractors - I love good humour, but stereotypical, slightly racist humour is not my cup of tea - and unable to finish other two books by Marina Lewycka, 50 pages into The Lubetkin Legacy I was a little bit thriller and decided to continue.
Mostly based on a compound designed by the architect Berthold Lubetkin which supported affordable housing projects in London, it takes an ironic twist to the bed-tax, which limits the number of rooms assigned to socially assisted families.
After the death of his mother, Berthold Sidebottom a 50+ unemployed actor, named after the architect with whom she apparently had an affair, is dealing with the perspective of being removed from his flat. In order to save his legacy, he requests a bizarre woman, Inna, met at the hospital, to move with him and impersonate his mother.
In parallel with his story, told in the first person, there is the story of Violet, the Kenyan-born young lady next door, which is always said at the third person, which is running at the same time. Although their lives cross for short, and always ridiculous amounts of time, there is not too sense of this second story which involve corrupt Kenyan politicians and dishonest London city companies. Each of the stories flow, but their presence in the same book do not make too much sense.
The social message of the book with discourses about equality and social justice is understandable, but the characters are so ridiculous, greedy and created to prove that, it seems that human nature is not designed to reach this aim. Therefore, you have unidimensional, mostly greedy and superficial, characters, unfinished and soul-less. Actually, there are way too many stereotypes for one single book.
Note to self: the next time be clear about the authors you definitely don't like, which is not a frequent occurence in my case

Posted by WildWritingLife at 27 September