My Thoughts about The Patriots, by Sana Krasikov 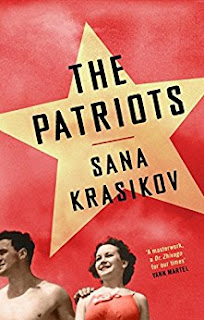 It is something about reading this book that didn't expect to happen: to make me feel at home intelectually, after so many years when I avoided to have anything to do with a world that I know so well. Better than any other worlds that I was blessed to know in the last years, because after all, the concepts and stories you grew up with are so much part of yourself, that even invisible crumbs of a Madeleine will bring you with the speed of life back in the past.
I couldn't read The Patriots by Sana Krasikov as fast as I wanted to. I was so caught up by the dense writing, so powerful that you can even imagine the dialogues in English with a strong Russian accent. Every 30 pages or so I wanted to take a breath and think about stories I've read or or heard as a small child growing up in a communist paradise - not Russia - while eavesdropping the complex political dissident discussions of the adults. Revealing only a quarter of them to anyone outside the four walls would have bring long years of prison to the participants, and I was warned regularly that if I dare to share some of the things I've heard accidentally - including fact that they were listening to forbidden radio stations - the orphanage will be my next home, as my parents will for sure end in prison. Actually, it was more than a case when such episodes actually happened, as the classrooms were often the place where teachers working for the secret - intelligence was something rarely associated with those institutions - services were requested to check the ideological conformity of the families, through repeated interogations of children as young as 6.
I had my own intellectual time when I was reading about prisons and communist delusions and comrades' betrayal and the state-supported anti-Semitism. In the last years though, I rather wanted the company of a 'chick lit' than to read the drama from the Gulag(s). I deeply disapproved communism, and hated the naive involvement of my own parents and family and their weaknesses and the fact that they gave up fighting accepting instead the daily compromises, even after the 'gods' were longed revealed as naked. Most of the people I know from those times are long gone and gone are my parents and the young people I used to know are out of my current sight. Actually, I gave up for a long time to go in the 'old country' and my contacts with that world are almost inexistent nowadays.
As a fact, as a child, I've read once some Soviet literature about Americans who joined the Russian Revolution and ended up building socialism as far as Magnitogorsk. The characters in the short stories were happily sharing their achievements in a society where classes and races were not counting, but the full dedication to the ideals of the Party. The main character of The Patriots, Florence Fein, is one of them. She wanted to be part of a great future who was built now and then. She bought a ticket dreaming about a Soviet man she met while working in New York, and ends up being accused of being a spy and condemned to forced labor. Florence is not one of the top communist leadership of the Internationale - she is not even a party member - later kept prisoners in Hotel de Luxe in Moscow. She is just a young lady enamored with the Revolution who will be wiped out by the destructive forces of the history.
Florence, as many middle level people in those times, will survive, whatever the circumstances. She has the right intuition to do it and to live to tell the story. Her husband, Leon, who can see clearly the failures of the system and it's becoming an ardent Zionist after the visit of Golda Meir to Moscow - proclaimed to his wife a well proved truth: 'Don't fool yourself. Everybody's tied together with the same rope' - will disappear without trace. In a personal way, I wanted to not like Florence, for her narcissism and her failures and her many compromises, but I ended up by admiring her. What should someone want to be a hero, until you are Nadejda Krupskaia? Following my personal and society post-communist interrogations I dare to say that the 'Party' suceeded to achieve a perfect confusion between victimes and perpetrators. Sadly, those who actually orchestrated the system often survived with their position unaltered, some of them even becoming successful characters of the new era.
The episodes of the story are alternatively placed in various time periods, which creates a welcomed balance of the story. I waited for the 2008 episodes, relating the adventures of Florence's son and grandson into the new Russia, as bringing a certain relaxation into the narrative, after the heavy episodes about interrogations and the darkest time of the communism times.
I am glad someone wrote this book as no one before. With humour - I couldn't stop laughing when Florence was accused of being part of the spy cell 'mish-pok', a mispelling of 'mishpucha', the Yiddish word for family she mentioned in a letter to her brother from Brooklyn - , smartly, without drama and passion, using the historical background to create stories. A very good book which resonates with the life of many simple people who although lost the fight with their beautiful ideals, survived to tell the story.