The Bloody Secret of the Three Envelopes 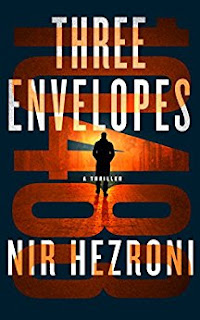 A gripping debut thriller written by a professionist in the field of intelligence, Three Envelopes explores the darkest labyrinth of the mind of the psychopat master killer. Agent 10483 was recruited by the Organisation a structure within the Israeli secret services, succeeding to simulate sanity and on the other side, despite the fact that at least one person was aware of his serious mental instability.
The problem appears when the puppet assumes he is the master and takes his role seriously. A dairy written in the present tense sent to the people responsible for him ten year after his presumed death shade light into some of his operations he was part of, but also warns that he might be ready to kick back again against those with a minimal involvement in his case. In fact, for a long time, Agent 10483 has embarked on an ssassination campaign on its own. The reasons are not security-related, but dictated by his sick mind.
The novel takes back and forth from the dairy to fragments from the past and episodes taking place in the present, when his deep psychosis and the dangers of him being alive are finally acknowledged. The back-and-forth alternation of time sequences creates an interesting profile of the Agent, with its obsessions and psychosis. Maybe in 'real world' his issues could have been fixed through therapy and psychological support, but his drama is that not all gifts are equal and he was easily took for something that he was not. Intelligence has its own limits and this is clearly one of the lessons learned of this book.
As for the ending...the reader might realise that he or she is also part of a mind game, not sure if clearly understood where everything is leading.
A very interesting thriller, written in a very alert style, hard to put down and with a haunting charm.

Rating: 5 stars
Disclaimer: Book offered by the publisher in exchange for an honest review
Posted by WildWritingLife at 17 September