5-Star Book Review: Everything I Never Told You, by Celeste Ng 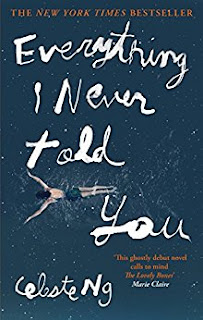 Set in the 1970s America, Everything I Never Told You by Celeste Ng is a story of race, intense family relationships and betrayal of dreams, told in a captivating, innovative style. Lydia is the teenage prodigy of a mixed Oriental (the choice for this term was explained by the author herself on a thread on her Goodreads page as in conformity with the terminology used at the time) -American family. She suddenly disappears and found dead after a couple of days.
Her story is told by different members of the family, and as the investigation advances, the complicated relationships between parents and their 3 children, themselves and their families are writing their own stories, adding tremendous pressure to the main story. James, the successful son of a poor Chinese family is university professor, while his wife, Marilyn, once a promising scientist, had to give up her medical school for dedicating to the family. They both put a tremendous pressure on their children to outperform and be the fulfillment of their failed dreams, in a society which is little by little more open to inter-racial relationships and women in positions of responsibility. However understandable such dreams could be, it is not the right of the parents to write their children story. We shall each and every one of us write our own story, and this is what Marilyn obviously missed when she willingly gave up her professional career. Her encounters with the neighbour next door, the medical doctor single mother of Jack shows her it is possible, in contrast with what her own single mother taught her. The 'sad and empty house' her mother left behind fuelled for a short time Marilyn's desire to never end up like that, but her radical decision of leaving her family for returning to study was short lived.
On the other side, James knew 'what is was like to never fit in' as he can easily notice the social inadequacies of his children. The deep racial discrimination against people of Asian origin, relatively less represented in literary creations was a stigma he wanted to remove from his children. But in reality, they were still considered strange creatures, inadequate and unfit, despite their good school marks.
And there is Lydia, epitomizing all the fears, insecurities and failed dreams of her parents. Lydia, who for years was keeping a blank diaries of days after days when nothing happened. Unaware of her advantages but clearly carying the weight of her curse. A confused teen, not yet able to grasp the nuances and details of the adult life.
Although it starts as one of the many sudden disappearances that made it into the top bestsellers list lately, Everything I Never Told You is an emotional story about longing and race and complicated personal stories. I also found interesting how it involved the reader into the story, as the only one who actually knows what happens with Lydia from the beginning, and is told a couple of pages in a while about what will be the fate of some of the characters.
Before the end of the fabolous reading year of 2017, I am glad I've discovered another great author. Can't wait to read in the next days Little Fires Everwhere.

Email ThisBlogThis!Share to TwitterShare to FacebookShare to Pinterest
Labels: 5 star book review, book review, bookish recommendations, celeste ng, everything i never told you, what to read