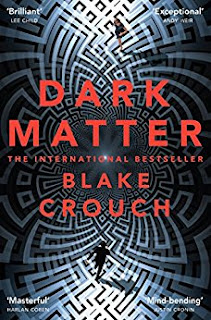 I don't remember for how long I haven't read a sci-fi novel, but for sure I can count less than 5 in the last ten years or so. But part of my efforts to create a diverse content for my blog and to enlarge my reading universe, I decided that given the literary hype, Dark Matter is a good new beginning in this respect.
Sci-fi lover or not, for the first 50 pages, you don't have any slight idea what is going on, but you don't get bored because of that. The writing is worth a movie sequel and the dialogues are dynamic and giving the real flesh but without a clear idea of what will happen next. Short sentences, with many verbs create the suspense and the adventure about to begin.
Jason Dessen is the main character and the victim of a strange chain of events that will have him kidnapped, drugged and brought in a derelict old indutrial place to be asked: 'How do you feel about your place in the world'. Once a promising atomic physicist after marrying Daniela, also a promising artist once, he decided to dedicate his time and energy to his family. 'My life isn't worth anything beyond its value to me and to my loved ones'. But is he really happy with this outcome, at least 50% of the time? In fact, Jason, as many of us, regardless how happy we are with our lives, he was 'obsessed with the path not taken'. Through this bizarre experiment, he can face all the possible options, and even a lot more scarrier than that.
His weird adventures will bring him in very strange places of his subconscious, in a display of quantum physics for literature and generally creative minds, which is well done. If before reading this book you had no idea about this scientific realm, now you will remember it for sure and I think it is a great way to give scientific weight to a sci-fi book. The problem is that the sequence is so often used in the story that is becoming an ad nauseam iteration. Like when Jason is meeting and is threated by his almost hundreds of variants of himself, all of them with the aim of obsessively being near Daniela, who was completely unaware of the quantum conspiracy enfolding.
The last quarter of the book ends up as a horror thriller, followed by a sci-fi conflict resolution.
Personally, it took me some time to fully adjust to the sci-fi narrative, but I really enjoyed the way in which complicated physics issues were translated into a literary motif. However, once I grasped the entire story, I ended up disappointment with the end. For a movie, it sounded perfect, but for the pure storytelling expectations, was half a disappointment.