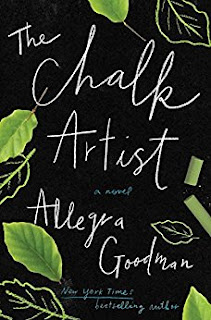 Floating between the imaginary worlds of poetry, online addictive games and love, The Chalk Artist is in itself a poem about inaccessible yet perishable worlds. The characters and their stories are part of a big web of individual jumps out of the current reality, in a world created by the mind games.
The lives of the some of the characters do connect at certain extents, in the virtual or real worlds or just melt from one realm into another in a way which might confuse both the reader and the participants to the story themselves. Such a choice make it a high stake for the author, which seems to not always cope fairly with all of the many protagonists of the story. Even in the case of the main characters, I often felt that the action is taking place too fast back and forth, neglecting the curiosity of the reader for more substance to the stories.
For instance, the love story between Nina, the modest literature teacher, daughter of the over-powerful owner of the gaming company Arkadia - a dream factory of the virtual reality - , and Collin, the chalk artist, lacks sometimes in substance, and if not their developing dependence of spending time together, in terms of sharing the same space, not necessarily being actually together, you cannot describe their relationship in too many words. They look often like two people hanging around together, without sharing too much passion or common values. Another disappointment for me were the dialogues, very limited in terms of adding a different layer of understanding to the narratives.
However, when it comes to re-creating worlds of imagination, Allegra Goodman is herself an artist. The small details of the virtual reality spread into a small teen room addicted to games - Aidan - are so clear that one might expect to be just one step behind the border between the two worlds.
Although the relationships between characters does not always make sense, most of them are assigned strong and clear, often antagonic, personalities. Like Viktor Lazare - '(...) escapism and delusion were not problems but products in Viktor's lexicon. He never doubted his profession, the way some of his colleagues did' - and his shy daughter Nina - 'She hated deception and excesses. She had grown up with games and she craved truth'.
In this world of deception and confusion, Nina pledges the cause of poetry. It elevates the soul and creates dependence of beauty and human greatness, simplicity and genuine feelings. She is a dreamer, but of a different kind of impossible worlds.

Posted by WildWritingLife at 24 December