A Disappointment: Mock my Words, by Chandra Shekhar 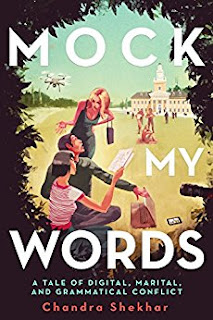 What is the probability that an American university hires for its English literature class a professor that despite an impressive writing style and book writing achievements displays talking skills showing a very limited IQ? Almost close to nil.
However, Chandra Shekhar built an otherwise well coordinated story around the frail and meek figure of David Tan, a Chinese-born academic with great writing skills, but with a vocabulary that even learning two words the day for his last five years of life in US would have been dramatically improved. His dialogues are so ridiculously limited that you might wonder how he is able to survive on the street completely on his own, but him, teaching in an American university in the English language? This assumption doesn't make any sense. Last but not least, David is talking with his father from China in some English too, with his simple father language skills highly proficient compared to those of his academic son.
This main flaw is in fact an annoying aspect of a book with well crafted subplots and page-turning everyday stories from the busy Californian corporate life. Laura, David's ambitious wife, looks like a negative character, although a very coherent one, but after all, you might wander why someone so over achieving will end up after all with someone she can hardly talk with in simple yet coherent sentences. The PR challenge she is coping with is also interesting and has so many realistic elements. Her counter-candidate, the gentle Melissa is also business driven, but in a more human way, but maybe her age makes a difference.
Actually, if not the annoying clumsiness of portraying David, I would have greatly enjoy the book, which I finished in just one late afternoon reading. However, most probably would be curious to read other books by Shekhar as his writing promises in a very curious way.

Rating: 2.5 stars
Disclaimer: Book offered by the publisher in exchange for an honest review
Posted by WildWritingLife at 26 December