A Dramatic Dark Fantasy: Map of Shadows by J.F.Penn 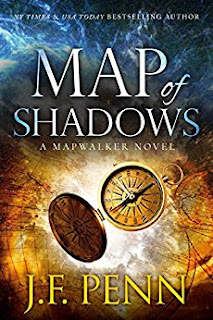 J.F.Penn, whose writings I often review on my blog because I love her writing, has a special art of creating characters and worlds that do stay for you long after finishing your book. Map of Shadows, newly released, is the first in a new series aimed at exploring the mysterious meanings of maps and borders.
Sienna Farren - 'aimless and wandering for too long to choose a path forward' - was having just another uneventful day at the Oxford Library where she recently started a new job, when the announcement of the murdering of her grandfather, owner of an old map shop in Bath, will completely change her life. It is just the beginning of series of revelations that will put her in contact with a new world and a new self. The picturesque World Heritage Site of Bath, the place at the heart of Jane Austen life and works, is assigned as an ancient energy center, a door to a strange and troubled world, the Borderlands 'a place where this earth bleeds into another',
Sienna is smoothly assuming the new role as owner of the shop where unusual things and people are taking place, accepting maybe too easily to embark on a search on the other side of the world for his long lost father and for puting a halt, together with other mapwalkers - a power whose meaning is about to understand and discover only by practice -, to an invasion of evil creatures that threated destroying the world. This is just the beginning of what looks as an interesting new series.
What I particularly loved about this book, besides very vibrant and highly emotional visual images created through words, was the exploration of the sense and meaning of maps and borders, in a world, as usual, on the move. Skilfully, the current refugee crisis and the destructive war in Syria are also part of this first episode, as an anchor to everyday reality for the contemporary reader.
Map of Shadows is a page turning and dramatic read, which keeps you alert and promises a lot of interesting evolutions, with the seeds of new development already planted in this first installment.

Rating: 4 stars
Disclaimer: Book offered by the author in exchange for an honest review
Posted by WildWritingLife at 21 December