A Five Star Book Review: The Leavers, by Lisa Ko 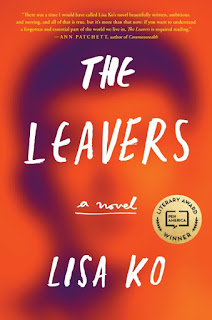 I've lately become very annoyed but books with a good plot and a lot of narrative potential that because approaching a specific feminist and inter-racial topic, ends up in an unpleasant cul de sac where the story is taking over by ideological considerations. My problem is that I really love such topics, but I consider the obvious direction of the narrative as an acceptable flaw in storytelling. It is sad to see that the author doesn't believe in the strength of its own words and prefer to push you think the obvious instead.
The acclaimed novel The Leavers by Lisa Ko is nothing like that. Thank Gd there are still great writers and storytellers on Earth. It follows a narrative line, it has real characters dealing with real choices because humans and not because they have to outline their difference and based on their ethnic status.
Polly, undocumented Chinese immigrant, the mother of 11-year old Deming Guo, disappears one day and never come back to him from her nail salon work. Adopted by a family of American professors, he is becoming Daniel Wilkinson but the disappearance of his mother and the weight of his lonely life are shaping his life decisions or rather lack thereof. 'He watched other people's reactions before deciding on his own; he could be fun or serious or whatever was most strategic, whoever you wanted him to be'. His post-adoption life was a permanent struggle to comform and be the person other people wanted him to be. 'If only he had the right clothes, knew the right referenecs, he would finally become the person he was meant to be'. His coming to age moment is difficult, leaving the school his adoptive parents expecting him to follow, giving up his role in a band he created with his best friend and wasting money on online gambling. The shadow of his mother and the mystery of her disappearances keep following him and until he'd found out and face her, there is no way to find his inner peace.
The characters Lisa Ko created are strong, as real as human beings can be, and with a complex personality. Both Deming/Daniel and his mother are different sides of the coin, but strong stones keen to deal with their challenging destiny. The identity challenges Deming/Daniel is facing, including in relation with his 'real' vs. 'adoptive' family are coming up smoothly into the story as natural as such situations can occur when the characters do share such complicated personal histories.
However, there are two small aspects that are slightly mismatched. First, the fact that those Chinese immigrants live like in a kind of vacuum, with no reference of the painful political past which created real drama in almost every family during the Chinese revolution. There are plenty of mentions about the new China, which cannot be avoided anyway if writing about present time, but the recent past is non-existent. Second, the fact that Deming/Daniel has no single memories and connections from the time he spent with his grandfather back in China for five years, while his mother was working in NYC is greatly unrealistic. Also, I am not sure how easy would have been to come and go in and out of China, for a child whose mother was illegal immigrant in USA and practically a run away from China. But those are probably details relevant for someone with extra political knowledge and interests.
Those observations put on the side, I fully enjoyed the reading of this book for its human authenticity and beautiful writing. Hopefully, to many more rewarding books in the next 12 months!

Posted by WildWritingLife at 04 January