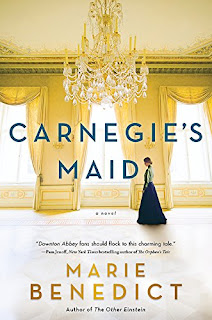 After the challenging reading of The Other Einstein, exploring the relationship between Albert Einstein and his first wife, the Serbian-born Mileva Maric, Marie Benedict is back with a very interesting novel of historical fiction setting a different perspective on the revered philanthropist Andrew Carnegie.
Set in the 19th century and written as a succession of diary entries, Carnegie's Maid is a story about Clara Kelley, an Irish-born immigrant to America which by accident ends up as a maid to the newly rich Carnegie family. Well-educated and cultured, Clara catch the attention of Andrew, the older son, and get acquainted with the practices and mindset of the business community. She learns not only the habits of the new rich and the social stratification, but also about strategies to succeed in life as a new immigrant. She writes at a certain moment: 'For the first time, I realized how alike my situation was to that of Mr. Carnegie. Although the scale was quite different, the stakes were not. The wellbeing of both our families rested on our success'.
In their own way, both of them will succeed to bring their families fame and a secure future, although their ways will part.
What I really loved about the book is how smoothly the story enfolded, the art of story-telling being much more entincing than in the case of The Other Einstein, which I loved actually a whole lot. The reconstruction of the historical context is realistic enough to give freedom to the literary imagination and create characters in their own right. The racial struggle and the struggle for equal rights for women are discretely interwined, giving a specific context to the personality of the characters.
The women in the book are strong, aware of their personality, but still exploring their options the society offers them, without necessarily pushing forth the limits. For Clara, there is a new world opening up, since she put her first step on the American soil. 'I had never considered that professions for women existed outside service and mariage, if one considered marriage a profession'.
Carnegie's Maid is one of those book you plunge into it and you want it hardly to not end. It has the right magic to bring you into the story, but also a strong reflective dimension that keep you thinking about strong women and their hard fight to be recognized as equal subjects.

Rating: 5 stars
Disclaimer: Book offered by the publisher in exchange for an honest review
Posted by WildWritingLife at 29 January