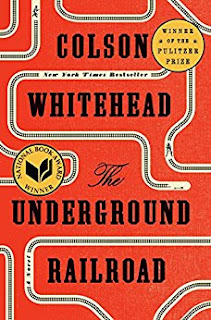 I had my first personal encounter with Colson Whitehead through The Intuitionist, a creative way to approach racial integration, and even went to an event with the author organised in Berlin a couple of years back. Back then, I enjoyed the lecture and the author's personality, but was less impressed by the writing and although the ideas in The Intuitionist were interestingly wrapped, I wasn't so impressed by the writing.
Therefore, I did not hurry up to read too soon The Underground Railroad, but somehow I've felt compelled to have a look at it at least because of the so many favorable reviews. Personally, I've liked it much better than the previous book, not only because of the topic, but equally for the crafted personalities of the characters, especially the women.
Placed in the America where black people used to be slaves, not too far away from our current era, it features the network of secret routes and safe houses created at the beginning of the 19th century by the slaves to escape to freedom, mostly Canada. According to historical accounts, at least 100,000 were able to break free through it.
The characters in The Underground Railroad not only plan their escape, but the their personality is shaped by their struggle and the observation about the injustice of their upbringing. They - especially the women - refuse to be vanquished by the circumstances. There is a new generation growing up, less keen to accept their lack of freedom as part of an illusory predetermined destiny. But in order to be free, they need to acknowledge their situation in its cruel entirety. 'What did you get for that, for knowing the day you were born into the white man's world? It didn't seem like the thing to remember. More like to forget'.
The historical account happily meets the social and political activism through good writing. A good book that deserved the laudative reviews that anyone interested in the colonialist history and the black American history should read.