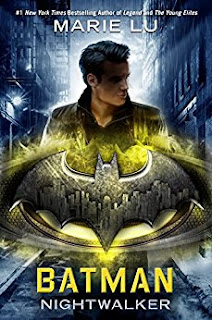 I'm guilty as charged: I often didn't pay too much attention to the story of Batman besides his brave heroic adventures. In my comics, the adrenaline driving braveries were enough for my adventurous reading mind, but I never seriously asked myself what happened with Mr. Batman when he was, for instance, just a schoolboy. How everything started?
In a non-comics - besides the cover, there is no illustration in this book - attempt at rewriting the history of Batman as a YA novel, Marie Lu wrote the story of the young hero in the making. Although I've read the book in one long afternoon/late at night sitting, the reading experience as such was nothing compared with my usual Batman experience. The writing is great and the descriptions are well crafted, some of the characters - but unfortunatelly not most of them - like Madeleine are complex and fascinating even in their versatility and human and emotional spontaneity, the story in itself has many suspense episodes, but overall I felt that something was missing. And I am not talking about the dramatic drawings.
However, I couldn't stop reading and did not have any intention to leave the book unfinished. I've found it great to have a story update in sync with the current high-tech standards which will make the book easily readable for the contemporary YA readers, but unfortunately some of the characters need a serious personality upgrade tooo. Bruce, for instance, the future Batman, is unpredictable in the sense that not all of his actions are necessarily connected with character features or thoughts. The action in itself is largely predictable which may diminish at certain extent the usual excitement associated with such reading stories. Madeleine Wallace is the main focus of the story, and if not her, most of the book would have been pretty banal from many points of view. The romance between her and Bruce is also predictable and not necesarily a great add to the story, as it makes Bruce even more uninteresting, a little toy in the hands of the big destiny awaiting him.
The second of DC Icons book - after Wonder Woman: Warbringer, by Leigh Bardugo - Batman: Nightwalker (ISBN 9780525578567) is a unique reading experience and attempt at telling the story in a completely different was from the classical graphic version. Therefore, a moderate lists of disappointments from people, like me, that grew up with a completely image and history of Batman.
The idea of creating the story and the writing adventure as such are noteworthy and would be interested to read more DC Icons books and also writings by Marie Lu. For now, is more than enough.