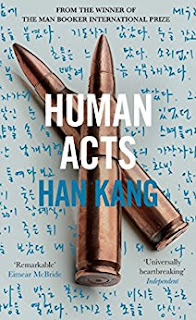 Han Kang was an interesting literary revelation of the last year, and after the Vegetarian, I was more than curious to explore another book of her, Human Acts, dealing with a political topic which is usually close to my everyday interests: the 1980 Gwanki uprising in South Korea. I've vaguely heard about them before, and I did some short online research about the events in order to have a clear background of the situation.
However, the big merit of the book is to go beyond the context, and to ask capital questions about life, death and at the end of the story, what is humanity. How can and why humans kill each other? What is the attitude towards everyday death, when you have, for instance, to guard dozen of corpses in different stages of disintegration, some of them killed only because they happen to be on the street? How can you comfort a parent that lost his child(ren)? What happened with the souls of all those departed? Do they meet those of their killers too?
There are accounts - most on the second person - shared by different persons - including one dead, monotonous stories that are limited just to describe over and over again details about events and thoughts. The cruelty of some details is painful in its banality. 'Next to each of their heads, a candle wedged into an empty drinks bottle flickers quietly'. 'On one occasion, the bodies of ten people they'd just piled up seemed to be missing the head. At first, I thought they'd been decapitated, then I realized that, in fact, their faces had been covered in white paint, erased. Swiftly shrank back. Necks tipped back, those dazzlingly white faces were angled toward the thicket. Staring out into the empty air, their features perfectly blank'.
The book is wrapped in the heavy ambiance of the big life and death questions that you usually avoid to ask, but you cannot keep ignoring when such occurences happen. Violent political and social events are inevitably creating such situations and the apparently neutral position of the writer, the intellectual, faced with such episodes seems the best attitude, because it allows to tell the story from all angles.
Human Acts is a difficult but inevitable testimony of just another episode of harsh times for humanity.