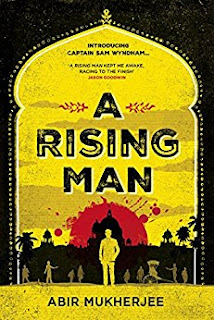 In the 1919 Calcutta, Cpt. Sam Wyndham, recently transferred from the Scotland Yard, is dealing with his first case. A local British personality is found dead close to a brothel with a paper with an independence message stuck in his mouth: 'No more warnings. English blood will run in the streets. Quit India!'.
Tracing the possible perpetrators takes place within less than a week, during which the days might not be filled with too much actions, but with a lot of reflection about colonialism and fine psychological observations. There are also frictions between the different local branches of the law and order system and Sam Wyndham is not your usual cop, all the little unusual and tensed episodes contributing to the appeal of the book.
Some of the characters are created with a deep and sometimes conflictual personality. For instance, Sgt. Bannerjee, the other half of the investigation, has a strong belief in the justice but found himself in a limbo while observing the way in which the Empire is repressing its own people more and more every day. Sam Wyndham is a non-conformist investigator, with a broken heart and the psychological wounds of the Great War where he participated as a combatant are still open. The investigation is just offering him a break from his own life, but he really enjoys fighting for the truth: 'The problem was, once I get a sniff of a case, I find it difficult to keep my nose out of it. And I don't take kindly to threats'.
The political observations from an India boiling to fight for independence are often inserted into the story, which makes this novel more than a mystery story, but adds a different dimension. Therefore, more than once I felt that I am in fact reading a historical novel, as it outlines a specific episode in the history of the relations between the Empire and its overseas territories. I've found that in the case of some passages, there are too many digressions, but the reading itself is enjoyable and announces a writer with a special personality.
The criminal is a surprise, but it makes sense in the context of the novel.
It looks like the author worked hard to reconstruct the ambiance and the local flavors of the 1919 Calcutta, the reader being offered at the beginning of the book also a map to make his or her way through the maze of streets and events mentioned in the story.
For a debut novel, A Rising Man is a good start. As this seems to be only the first book from a series featuring Cpt. Wyndham, we shall wait for the next works by Abir Mukherjee.

Posted by WildWritingLife at 21 April