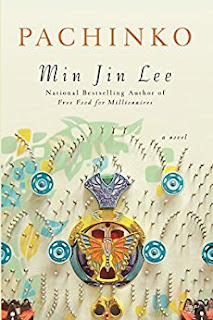 A family story covering over two generations, Pachinko is a detailed and complicated story about Korean experiences in Japan during and after WWII.
Pachinko is the name of a pinball game, popular in Japan for recreation and gambling. The player can push the ball in different directions, but the final trajectory within the framed box is rather the result of luck. Similarly, the life of this Korean family which settled in Japan escaping hunger and instability is governed by the unknown rules of hazard. Sometimes, there is a plan, including to return one day home, but the gravitational forces of the political and social events succeeding very fast are changing dramatically the destiny of the characters.
This book that is the result of almost 30 years of polishing and documentation is populated with strong and interesting characters, many of them able to survive only through the resilience of accepting the destiny without being subdued by it. Those who are against their condition - social or inherited - are disappearing. Regardless the situation, education seems to be the winning ticket, particularly when you belong to a discriminated minority.
It took me more than a month to finish it, because although I am a speed reader, I felt the urge to carefully think about some chapters and events, trying to enter the mood of the novel or just to keep an open mind becoming accustomed to the complicated human interactions in Japan. The novelty of this book is also its focus on the Korean identity in Japan and the life hardships of this small community. The book approaches also the struggle of the Koreans born in Japan between their loyalty to a country which is denying their full status of citizens and their doubtful status regarding their belonging to Korea, particularly after the division of the country. There are interesting tensions created between the characters and events aimed to challenge and outline loyalties, and many secrets well kept. An interesting character which reflects the identity story is the US-born Phoebe, whose knowledge about Korea is rather of cultural nature, without being fully bred and assimilated with the Korean culture, but belonging to an open culture where being born part of an ethnic group doesn't create identity obligations and responsibilities.
Beyond their ethnic and family status, the characters are created free as humans, with their choices, mistakes and resiliences. It also has a particularly thoughtful part about motherhood, its sacrifices and overwhelminess. My favorite character is Sunja, the survivor daughter of a poor family which is leading modestly the chain of events. She is strong and determined yet fragile when she has to face her rebelious first born son.
The story is minutiously built yet I felt a certain disbalance between the first part and the rest of the novel in terms of the chain of events and new characters entering and exiting the story.
I recommend this book to anyone interested in multi-generational sagas, stories about identity and Asian history.


Disclaimer: Book offered by the publisher in exchange for an honest review
This post contains affiliate links. At no cost to you, I earn a small commission if you decide to purchase the book. It doesn't affect the way you shop books, and it's a great way to support WildWritingLife blog.

Posted by WildWritingLife at 15 April