Book Review: The Kindness of Enemies by Leila Aboulela 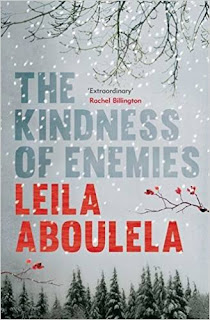 With a story switched from contemporary rural Scotland to the 19th century Dagestan, Georgia and Russia, The Kindness of Enemies is an account of identity and spiritual transformations. Natasha Wilson, former Hussein, is a single university lecturer living in Scotland, born in Khartoum, Sudan, the daughter of a Russian mother and a Sudanese father. Her interest for the 19th century Chechen Imam Shamil brought her in contact with the family of her student Oz (from Osama) Raj, who owns the sword of the famous fighter. She arrives shortly before Oz is kept in the police custody for terrorist activities. Although he is released without charges, her office is searched, her computer and phone are confiscated and her academic career could be at risk.
The other story which is told in the pace and tone of the old legends takes the reader from the mountains of Dagestan or Georgia to the splendid ball halls of St. Petersburg. Shamil's son Jamaledin is kidnapped by the Russian troops and turned into a 'civilized' Russian. Princess Anna of Georgia is kidnapped by Shamil troops in order to save a deal to get Jamaledin back. Her experience there will remain a cultural fascination of another world and of raw feelings expressed differently from the usual 'Western' way. Forced to return back to his family, Jamaledin will remain until his early death nostalgic for the glittering of the dancing halls and the culture he left behind, although he remained for his entire life an 'other', with a different 'identity'.
On the other side of the time and the world, Natasha is faced with her own identity choices, as his father stays dying in Khartoum. In one of their last conversations, he requests her to leave everything behind and move back to Sudan, because she belongs there, ignoring the choices she made, including by changing her family name for the one of her step-father, more Westernized. Under pressure, she starts writing a new academic article.
At the end of his life the fierce fighter Shamil will decide finally to give up his fight and become an allies of the Russians. His choice is the topic of the posthumous short novel by Lev Tolstoy, Hadji Murad, written in a very pessimistic vein. Contrary to the novel - who is the last spiritual connection between Natasha and her Sudanese father, one of the few memories she wants to bring back from Sudan after his death - Aboulela books is more faithful into human nature. As the famous sword of Shamil - a purchase rather made for decorative reasons than for ideological allegiances - is never returned to their owners, but it is more to life than a sword. As the character Shamil seemed to realized, inner peace and reflection are preferable to a life of permanent struggle.
Besides the interesting topic of making cultural choices and the controversial history of cultural representations in history - the symbolical meanings assigned change in time - the book opens an interesting discussion about the balance between identity and identities, how we assume them or decide to leave them behind.
In addition to the rich repertory of ideas offered by the book, I also loved the carefully crafted sentences: short, expressing ideas clearly, avoiding the pathetic verbiage. As a minus, I felt that both from the point of view of the story telling and the events related, the Scotland story is less richly told compared to the Caucasus sequence. Maybe it was a literary choice to do so, but sometimes coming back from the past into the routine of the present story was felt as raw and too abrupt. It was like returning from the shining St. Petersburg to just another boring training day in Dagestan.