Book review: The Future for Curious People by Gregory Sherl 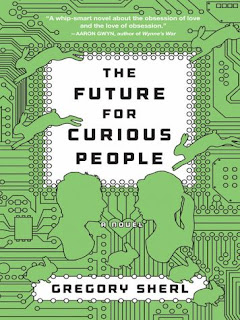 What about you can see the future of a relationship? Would you accept to continue getting involved in a story without any foreseable prospect? Set in Baltimore, this novel follows the sentimental searches of Everyln Shriner, librarian, and Godfrey Burks, employee at the Department for Unclaimed Goods, for finding 'The Match'. They don't use matchmaker or online dating, but the the ultrasensorial powers of the strange dr. Chin. By using sensoy information and memory, the future can be predicted by using a Google-like time travel computer. One can travel into the future and see the potential of a relationship, but also eventual fate of the first of kin and even children. Warning: 'In the case of true love, there can be system failures'.
The story is half-humorous, ironic and with characters with OCD-inclinations (Evelyn, for instance, uses the chance of extra searches into the machine for obsessively checking any potential male he had to deal with if he is a match), as the author himself apparently. The travel into the future also brings a bit of science fiction flavor into the story.
Although there are many scenes that makes you laugh, the basis of the novel is very serious, at least many couples or singles take it (maybe too) seriously: finding your one and only and living together happily ever after. We don't only want the relationship, but the neverlasting romance. And we wish there is a game of sorts that would help to know which one is the best - because who would like to waste time with a no-go relationship when the perfection is just a couple of matches away? But what about life? Would we be happier if we can read beforehand the story of our lives? The temptation is big for everyone, indeed, but I personally will not trade my incertainties and potential of learning for any guarantee of stability, be it sentimental or financial. I rather prefer to work hard the present to built the future, not the other way round.
It is a book to read over the weekend, an easy one with some challenges and interesting ideas - including about identity and its basis, with references to indie bands such as Modest Mouse or Cat Power, and a relatively simple story. It is slowly paced and can challenge your dreams and hopes about 'true' love. Maybe we, as humans, we are meant to fail sometimes and there is nothing wrong with that.

Posted by WildWritingLife at 02 April