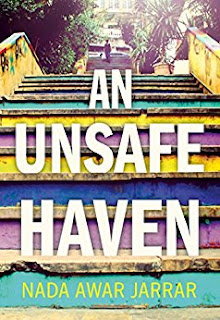 After the poetical exploration of home, Nada Awar Jarrar wrote a complex book about displacement, bringing a perspective from the Middle East to the literary representations of the refugee issues.
How can you continue living a normal life when nothing is certain? What does it matter most: people or places? Is it morally acceptable to put safety first, including before family and leave a place torn by war?
Every character of the book has its own story of displacement, which brings a diversity of angles and views on home and homelessness. Maysoun left the war-torn Iraq bringing her mother with her. Peter moved from America to Lebanon in order to live with Hannah who refused to leave her family in Beirut. Fatima is a Syrian refugee living in a camp nearby. Anas is an artist from Syria whose German wife decided to run to Berlin with her two children while he was out of town, after an explosion took place on the street where they lived. Everyone experienced what does it mean being a stranger, being out of place, although only from a neighbouring country and sharing at least a language and some common traditions.
Peter's observations are relevant for the discussion, especially in relation with her wife, Hannah, a journalist coping with the weight of writing an objective story about life in Syrian refugee camps: (...) as conflict spreads throughout the region and Lebanon tumbles in the midst of it, he senses resistance in himself to the incertainty of it all, finds it increasingly difficult to separate place from people, to disconnect his love for Hannah from the country to which she belongs'. 'Peter became aware of an invisible connectedness between people and places here, a kind of map of everyday relationships, of being, that was easy to follow once you knew how and made for a sense of rootedness which he had not encountered anywhere else'.
I particularly loved in this book how the reflections about identity and home are intertwined with the events of the story, like every episode of the story brings more meaning to the discussion.
At the end of the book, a big question remains: What is the element of stability against dramatic changes? Family, homes, countries...they are coming and going. Anas, the artist with a tragical destiny, was trying to catch the moment of inspiration and turn into an aesthetical experience, but this changes too, because the meaning of art differs from a person to another and the work of art itself is just a sequence from a chain. Can we, as humans, cope with the loss of continuity and lack of roots, becoming like the refugees 'shadows (...) colourless and in some ways invisible to everyone else'? We might look for a ground, more than ever, but the world we are living today, in Europe or the Middle East, seems to counter powerfully this gravitational force.