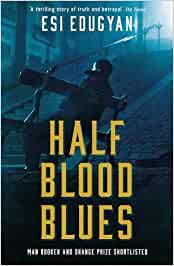 There are a lot of elements that keep a good story together. For me, it has to do with the ways in which each and every separate fragments of the story come together to woven the big story, connecting dots of stories and characters into a big seamless shape. However, there are some novels with very well and neatly shaped fragments of the story that do not match always good together with the rest. Or, the narrative as such is mostly absent because assumed it is predictable from the start.
Half Blood Blues by Esi Edugyan is one of them. The fictional character, the German-born citizen young Black musician Hieronymus Falk is arrested in a café in Paris, where he run with his other musician friends. He disappears without trave and assumed he was killed by the Nazis. 50 years after, his friends Sid and Chip are attending a festival dedicated to his memory when they got news that their friend might be alive and well, living in Poland.
With episodes alternating back and forth from the past and the present, the book follows the adventures of the musicians, their dreams and failures and frail human relationships. The story is told by Sid, the last person who´ve seen Hiero, that has a terrible secret to hide. A well-burried secret that will be later shared with Hiero upon reuniting, making it one of the most beautiful endings I´ve read in a while.
´Think about it. A bunch of German and American kids meeting up in Berlin and Paris between the wars to make all this wild joyful music before the Nazis kick it to pieces? And the legend survives when a lone tin box is dug out of a damn wall in a flat once belonged to a Nazi? Man. It that ain´t a ghost story, I never heard one´.
There are many historical elements the book relies on: the jazz life in Berlin in the 20s-30s, that ended up being labelled as ´degenerate´; the case of the German POC, whose fathers were mostly North-African born soldiers of the French Army that entered the Ruhr Valley during WWI and ended up marrying local German women; the situation of those Afro-Germans during the Holocaust. The full fact checking require a long bibliography for sure, but it is noteworthy that Esi Edugyan introduced this topic into the mainstream literature.
There are so many interesting episodes of this book: the dialogues are so alive that you can imagine the exchanges of the musicians just in the front of your eyes; the adventurous escape from Germany and their musical adventures in Paris where Louis Armstrong joins; Sid´s life hiding a secret of treason; the journey from Berlin to Poland for meeting Hiero. On the other side, there are also things that I was expected differently: the meeting with Hiero, Hiero´s story in Poland and maybe more development of the ´present´ story. And first and foremost, a differently told story. But the challenge of discovering a new author and a new topic for a historical novel was taken.

Posted by WildWritingLife at 08 May