Central and Eastern Europe, 30 Years after the Wall 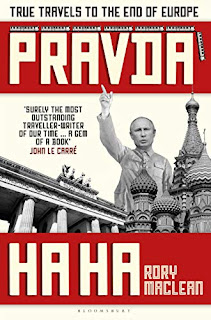 In early 1990, Rory Maclean traveled from Berlin to Moscow in a Trabant, documenting the tremendous changes Central and Eastern Europe was going through. 30 years after, he is back for an update, more or less on the footsteps of his first journey (published and multi-awarded as Stalin´s Nose, that I haven´t read it yet, therefore I may miss a couple of references).
There are completely new realities settled since: the oligarchs in Russia, the cyberattacks, the immigration from outside Europe, the old myths and a new golden age of mystifications.
Writing travel stories is mostly a subjective endeavour, like writing in general. Every writer, journalist or blogger and travel enthusiast makes a selection based on his professional, personal and academic background. A historian will be interested in facts from the past reflected into the present, the journalist of the latest events and political skirmishes, the cultural writer about the specific spiritual works encountered around the way.
In Pravda HaHa the Canadian-British writer Rory Maclean is talking with people, new and old acquaintances, hearing their histories of life in the new realities. Although he may have a plan of people he wants to meet, some of them part of his journey 30 years ago, there is the spontaneous human contact which makes the best of the story. Like, for instance, the Michael Jackson fan Sami, the Nigerian illegal immigrant he will help to get out of the (new) Russia.
One of the many reasons I love to read travelogues is for the huge diversity of characters and stories. If you are reading the good ones, there is rarely a story which may repeat itself. Rory Maclean repertoire of adventures is a high-end human selection. He is going harvesting with an minigarch (not an oligarch) a phallus shaped truffle mushroom (locally named pipiska putina), is playing in a casino in Kaliningrad, is interviewing the then social media star of the Transnistrian diplomacy. Are times changing so fast? Are those tremendous changes a firm ´good bye´ to the past?
Rather the opposite, among the old and the new generation, there are old behaviors reapprehended. A certain wariness of not stepping out lines, an acceptance that the direction of the things is decided elsewhere and there is not other way than to follow. And there are the dreams of impossible greatness shared in common, but with a different content in Russia, Poland or Hungary. What about the German state of Saxony, introduced as a kind of German Texas? Where Rory Maclean is checking his priviledge of enjoying freedom of speech and movement, young or less young people in Central and Eastern Europe want to build more walls because ´xenophobes only stand in their own shoes, of course´.
But what is Europe nowadays? How do you define it? Is the so-called West safer from illusions? ´Where there is the real end of Europe? I once thought it to be a physical place, perhaps the line of the river Oder or the Urals. I realise now that it is not a freak of geography and far more a question of culture and morality, a matter of principles. It´s the point where antique forms of identity clash with modernity, where tolerance, decency and a certain way of thinking end, where openness meet a wall´.
In fact, there is a very long discussion with no end in sight. 30 years after the end of the Cold War, there are many things boiling hot in this part of Europe. And as a matter of fact, everywhere. Travel stories are one of the most direct way to connect to those nascent realities.

Rating: 3.5 stars
Disclaimer: Book offered by the publisher in exchange for an honest review
Posted by WildWritingLife at 03 May