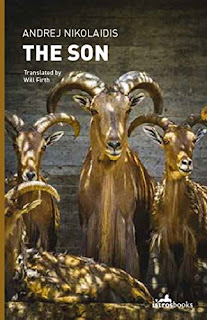 I´ve heard more than once that the relationship with your parents influences at a great extent the way you relate to the world and other humans in general. I am not convinced about that in my case, but The Son, by Andrej Nikolaidis - originally published in Montenegrin as Sin, translated by Will Firth, published by Istros Books - spins at a great extent on a disfunctional/missed father-son connection. Nikolaidis is born in Sarajevo, in a Montenegrin-Greek family and is a political advisor, columnist and novelist living in Montenegro.
The book is short, a little bit over 100 pages, and takes place within 24 hours. An unnamed writer with no noticeable work, living in the city of Ulcinj - situated in the Southern part of the city, with a significant Albanian population, according to various tourim-related online sources - is left by his wife. His failed marriage just happened. ´Things never fail because of me, nor do they go off well thanks to me. They always happen with me as a bystander. I just adapt to them´. This is how he imagined his life to be as a child: ´As a child I imagined life as an enormous desert which I had to walk through while trying not to distirb a thing or to leave any trace´. What about his writing career? Why is he doing it after all? There is not answer to that during the aimless wandering journey through life and dreams of this anonymous character which looks so familiar with the soul broken characters of the Central European literature.
A diluted Freudian, he is carrying with him a trauma: ´The trauma I carry with me from my earliest years is my father´. Hence, his radical view on parenthood and family in general: ´As long as they live, parents destroy their children, and their children pay them back for it and don´t relinquish their thirst for vengeance until they´ve sent their parents to the grave. Every family home can turn into a slaughterhouse. A tiny catalyst of just a single word is often all it takes for the history of abuse and hatred hidden under a semblance of harmony and love like in an old-fashioned memento chest, to end in bloodshed´. Fragments of dreams and realities are recomposing in a spinning-way over and over again, with different characters but similar pattern which excludes beauty and kindness and a break from internalizing the projection of trauma. There is no end to the nightmare. The son is obsessed with the father as a source of power and opression and an existential threat as much as the father is obsessed with the son, as his projection of ownership.
The wandering anonymous writer is misanthropic, cruel, cynical and emotionally unstable in his obsession. It seems his obsession of the father´s obsession is breaking him into the cruel pieces of non-existence.
I´ve seen previous reviews outlining the influence of Gargoyles by the Austrian writer Thomas Bernhard. I´ve only read Old Masters by Bernhard long ago so I cannot delve into this specific reference.
The Son by Andrej Nikolaidis, that won the European Prize for Literature in 2011, is not an easy read as filled with a deep dark mood of Weltschmerz. No cure, not too much courage to end it up, all is left is to fill then the files of the notebook with one single word.

Posted by WildWritingLife at 02 May