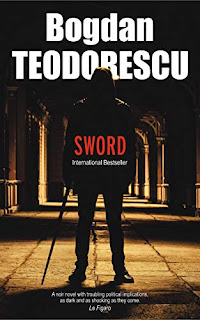 ´(...) close down that radio station immediately´.
This is how sometimes, in some places, things go - bad - with the media: a president requests to the head of the ´Intelligence´ Services to eliminate - technically, in most cases - bothering media reports. A journalist that bothered the current president might be the favorite of the next president. Or, during the same political mandate, one journalist turns into the current president´s darling. Things are relative, eventful and full of ´real´ life, not the boring bureaucracy of the Western world where things are running up and down no matter who won the elections.
Sword by Bogdan Teodorescu recently published into English by Corylus Books translated by Marina Sofia is less about the investigation of finding a mysterious serial killer that is murdering members of the Roma community but about a tragi-comical political bestiary. It looks like the author, himself directly involved into the post-communist political realities in Romania, wanted to write it all, about the corrupt media institutions and their directors hungry to eff some big advertising deals from state institutions in exchange of a truce, about the self-absorbed regional leader bothered by the unplanned skirmished between political parties, about the frictions between different layers of the administrative power and the intelligence secrets.
Instead of finding the killer and starting a legal investigation, all those institutional branches and individuals are becoming erratic, start either using the situation to gain political advantage or to ignite hate against Roma, a group of people that according to the popular opinion is considered detrimental to the country´s image abroad, as if the fact that their representatives were kept away for decades from education and decent life standards was the result of some aliens´ intervention, not the state authorities.
There are a lot of references that make more sense for someone really familiar with the details of the post-communist Romania - including the cast of politicians and journalists Bogdan Teodorescu was inspired by - but otherwise you can easily enjoy the book even if it is just the third or fourth time you´ve  heard about a country called Romania.
I´ve welcomed the ending with a gross laugh, like it made so much sense, darlings, because yes, this is how things are down there, what did you expect, to go by the book and really search for the killer?  Bucharest Noir at its best, indeed...

Rating: 3.5 stars
Disclaimer: Book offered by the publisher in exchange for an honest review
Posted by WildWritingLife at 17 May