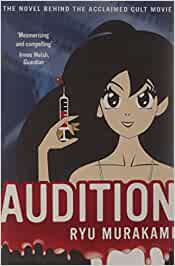 ´The music blasting through the living room only heightened the unreality of the scene. A beagle with two severed limbs lay on the coffee table in a pool of blood between the outstretched legs of a paralysed middle-aged man, while a beautiful young woman in a black sweater, jeans and sneakers moved about serenely in the background´.

I had my first unhappy encounter with Ryu Murakami a long time ago, when trying to read his first book Almost Transparent Blue, in a French translation. After around 20 pages I have up for good and had this writer added on a list of authors that most likely would not be interested to reconnect with. The decision had to do with the subject not with the writing, but it is a pretty serious criteria: while the writing can improve from a book to another, the choice of the subject indicates clearly why I would rather avoid an author.
Many years after, one year spent in Japan and many books about Japan and by Japanese writers, I´ve randomly stumbled upon another Murakami: Audition. This time I made it to the end, as now I do have a bookish blog to share my opinions, but it will take an eternity to return to this author.
Audition was translated into English by Ralph McCarthy, who authored many of this Murakami works. Included in the category of ´Japanese Gothic´, it was turned into a movie in Japan in 1999, and made it into English only around ten years later. Although there are many references of cultural and historical nature that may explain some behaviors and contexts mentioned in the book, for the non-Japanese reader this book is kind of psychologically difficult, almost unbearable. I am not one of those sensitive readers to feel outraged by violence and aggressive explicit scenes, but there are some layers of aggressivity which is too evil to cope with in writing.
Seven years after the death of his wife, Ryoko, the documentary maker Aoyama, 42, is repeatedly encouraged by his teenage son to remarry. His friend and colleague Yoshikawa suggests to organise an audition for a ad, that can be used as an excuse for finding a match. After all, the potential candidates - thousands of them applied - shall offer insights about their professional and personal path, a picture and this shortens the usual time spent on dating. Aoyama accepts the plan, although reluctantly and apparently there is a winner, Yamasaki Asami, 24, an aspiring actress with a blurry past and a heavy traumatic past. Yoshikawa is wary about her but Aoyama is blind, as those seven years when he waited for the right one to come were for nothing. He is becoming so obsessed about her - without revealing though the truth about the audition she was part of - that even after he is being drugged into unconsciousness by her and the awakened alone in a hotel room when they had sex for the first time, he cannot stop thinking about her. ´It was like a narcotic (...) and not just metaphorically. Her voice and smell and touch had provided him with exactly the same sort of things, chemically speaking, that certain drugs provide and the receptors in his brain were clamouring for her´. Aoyama seems like a man empty inside, unable of simple emotions and with a vague notion of himself.
There are a couple of hints blew into the book on several occasions trying to explain the post-WWII Japanese society and the current state-of-affairs of its youth, especially the shift from a status of need - the scarcity of resources after the war - to one of permanent need, as it happens nowadays (´It´s difficult to control the desire to accumulate things´). Within this new configuration, the woman - liberated, free, independent, mostly single - evolves from an angel looking for a new pair of protective wings into a bloody psycho. Yamasaki Asami is an example. On the other hand, the men are mostly passive, stuck into their brains and unable to understand either the nature of the evil or if/where they are wrong.
The story line is evolving with the same intensity as the tormented young woman. It starts slowly, with some minimal exchanges and events, with some delicate hints about something that it might come at a certain point and it is a terrible outcome - ´He had no way of knowing the unspeakable horrors that awaited him´.
There are horrors, indeed, that just happen, while Aoyama still stays unbroken and emotionally numb. Which is in itself enough to bear with in any literary worst case scenario.

Posted by WildWritingLife at 22 May