Political Conspiracies with a Taste of American Elections 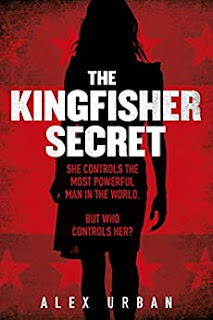 Look at least for a second at the American political life right now? Some may call it circus...Do you need any conspiracy theory to explain what is going on - why Americans are morbidly fascinated with conspiracies theories is a topic to study more into detail one day...Is there any explanation or theory strong enough to bring clarity into the chaos?
And first and foremost, do we need novels to reify the confused facts, figures and declarations of the president in office?
After all, Trump supported generously those who assumed that Barack Obama is not born in the USA therefore unfit for being president of the United States. The Kingfischer Secret, published anonymously - on Amazon.de the name of the author is listed as Alex Urban - assumes that in fact, president Trump is the puppet of his ex-wife Ivana - the mother of Ivanka, Eric and Donald Trump jr. - a well-trained KGB-trained spy.
Born in then Czechoslovak Socialist Republic, Ivana was Documents published in the English-speaking media outline that Trump, through his relationship with Ivana, born in the then Czechoslovak Socialist Republic, was a target for the local intelligence services, that were strictly controlled by the KGB. The fact that she, and her parents were somehow connected to them is a possibility, as recruiting people with a certain level of IQ and exposure to the outside world was national sport for all communist ´intelligence´ services. The fact that Trump has some weakneses that KGB loved to exploit is also well known so if they were really interested in playing with him, there were no difficulties in doing it.
The Kingfischer Secret uses the premise that KGB developed in the 1960s a program, mostly using beautiful, well-trained women originally from Central and Eastern Europe  - including into the secrets of French cuisine and drinking champagne - ´to encourage and create agents of disorder and chaos in America, to use democracy as a weapon against itself´. Anthony Craig an incoherent, self-absorbed businessman, ´struggling to keep his mop of hair in place´, a billionaire automaker with lots of problems, is about to win the US elections. Her ex-wife, Elena, is a successful businesswoman that created her own beauty brand while remaining a trustworthy advisor. An unremarkable journalist from a Canadian tabloid that used to be her ghostwriter takes all the professional and safety risks by advancing her researches about Elena´s life before becoming famous. A decision that will put her into high risk as she is revealing more and more pieces of a high-end international conspiracy leading to Moscow.
Is it really worth reading it? I was curious about the thriller as such, otherwise I was familiar with the non-fiction materials and the answer is ´no´. The journalist lady is completely unprepared for the task, her journalistic investigations are sloppy and unprofessional, she is just gathering material but has no idea about how and where to pitch it, she lacks any professional friends and network. She is under threat, followed during her investigation but left to meet her sources that, especially given the story she is about to cover, are meeting her way too easily. She is harassed, physically aggressed even, her cat is killed, but she is wondering in her self-centered world. Does she not have any journalist friend with contacts into the police to help her? Also, is it not a bit bizarre that all those KGB spies are drinking too much champagne, long before perestroika?
Verdict: there might be a crime, but the tools used to explain it are not at the heights of the expectations. So sorry the journalist´s cat was killed but this is the current state of affairs of political thrillers using Cold War settings? Gone seem to be the days of a non-boring, blood thirsty spy novel with real spies, real secret deals and real presidents.

Posted by WildWritingLife at 17 May