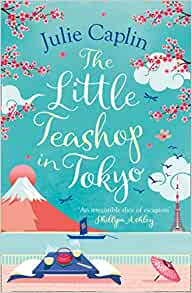 It feels good sometimes to read other people´s successful romantic stories, even there are just the product of imagination. Added to the everyday romance, they just show the infinite range of possibilities that we can face in our everyday life. I am not very good - at all, actually - at romance but I can refuse myself a late Sunday afternoon in the company of a novel that aims at making the readers ´feel good´ with the promise of delivering a love story, with, obviously a predictable happy ending.
The Little Teashop in Tokyo by Julie Caplin is built as a balanced photographic composition. The main - romantic - characters, Fiona and Gabe are passionate about photography. He, a multi-awarded photographer living in Tokyo with projects all over the world. She, a travel blogger and hobby photographer that just won a 2-week all-expenses paid trip to Japan for taking pictures to be later exhibited in London. The trip included the mentorship of a famous local photographer that happened to be replaced by Gabe. And she already had an adventure with him ten years ago, when she was 18 and he was a photography teacher. She kissed the teacher then, it was consensual but after being caught by a colleague she was bullied and ended up by giving up going at school at all.
A bit too predictable, they properly feel in love and are about to write their story.
The references to the Japanese cultural context and various concepts, especially those outlining the closeness to nature and the focus on the simplicity and essence of things, built into the most interesting part of the book, which balance the emotional part. The Japanese family that owns the little teashop where the most tensed moments in the book are consumed balances the genuine chaos of the two romantic characters. Similarly, the discussions about photography and the art of taking pictures add interesting depth to the book, but this observation may be my thing as I am personally interested in photography.
Both characters, Gabe and Fiona, are not clearly portrayed and are rather behaving purelly hormonally. In her late 20s, she is reacting emotionally childish around Gabe, in a rather obsessive way, having in mind that kiss but wanting for more, just to get that emotion back. He is better structured, but with a penchant for abusing himself, jumping way too fast from the dependence of a stubborn muse, Yumi, who married and abandoned him but still abadoned him, to Fiona. I´ve found a bit boring that he is obsessively trying to convince everyone that he does not have an intimate relationship with Yumi anymore, and keep repeating that she is abandoned by her rich Japanese husband. One can say a thing in so many ways, no need to be so repetitive.
As for the sudden romance between the two, that he also longed for, is not that such a change can take place so fast in real life, but it´s rather fortuit. They are just falling into each other one second, and the other they already have in mind some possible ways to develop their long distance relationship.
The dialogues between the characters are interesting except the moments when romance is involved when they are just reacted, which can happen in real life, but I would have prefer a little bit more of context. After all, I am a reader, not a character in the book so need more entincing.
I had completely different expectations from this story and besides the cultural part, and the good literary composition of the story itself, The Little Teashop in Tokyo failed to impress me.

Rating: 2.5
Disclaimer: Book offered by the publisher in exchange for an honest review

Posted by WildWritingLife at 25 May