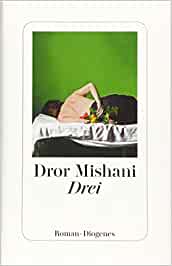 Dror Mishani is a sensation in Israel among the crime novels lovers, especially for his detective stories starring detective Avraham Avraham. His first standalone novel Three/Shalosh reached an even greater popularity with plans for a TV edition. The psychological thriller was translated in over 10 languages, being awarded the Deutsche Krimipreis - the international category - and was for over 25 weeks on Der Spiegel bestseler list. Given this high wave of popularity in Germany, I decided to read the book in the German translation - published as Drei - of Markus Lemke, a multi-awarded translator of Hebrew and Arabic who translated into German, among others, Leah Aini, Jeshua Sobol, Eshkol Neve and Yoram Kaniuk. The French translation of the title - Un, deux, trois - makes for me more sense from the point of view of the story.
Gil, the evil man character of the book, is a normal lawyer with an active life. He has two daughters, a wife - sometimes introduced as the ex-, sometimes not - a busy portfolio of clients looking for real estate investments in Central and Eastern Europe or for a EU passport in one of those countries, just in case wars are breaking again and they need a safe haven out of the madness.
On an online site for divorced people, he meets Orna, freshly divorced, single mother of Eran. She is a teacher, busy with fixing her and her son´s life after her husband left for Nepal to settle for a new family. The relationship with Gil, which lasts half a year is non-eventful, easygoing, as it happens when none of the two want a commitment, just sometimes intimacy and someone to talk with and go out with, once in a while. After she spots him in a mall with his wife and daughters, is able to figure out that he might be a fake, but still keeps meeting him. (Curiously, she is does not look too much into his life, eventually but finding someone that knows someone that knows him, which is so easy in Israel; she not even check his online references, and does not seem bothered that he does not have a Facebook profile, a very popular social network in Israel). After all, there is no commitment and no expectations. Until he invites her to join on a trip to Bucharest and he kills her in a hotel room. The verdict: suicide.
After a while, Emilia follows. She is from Latvia, took care of Gil´s father until his last moments and is going through difficult times. She knows him and his family, so no additional lies are possible. He asks her to clean his apartment, where she will discover media snippets about Orna´s death that she is trying to translate from Hebrew, a language she is still trying to learn. She keeps cleaning regularly the apartment, and meanwhile a kind of idyl among them is blooming, but everything is relatively cold on her side.  Until he invites her to a trip abroad, but before that, some events take place and he kills her too, with a similar suicide setting that at least for a while is believed.
The third time is slightly different, because Ella, the woman he is about to kill, has other plans and knows him better than he thinks. She will end up his career of accidental killer.
Three/Slalosh/Drei by Dror Mishani is part of the new trend of psychological thrillers when the criminal is such a banal one of us. Nothing more nothing less psychotic, trauma-driven or resentful. He is probably a bit bored, but the reasons of his crimes, at least in this book, ar not clear and will not be clearly stated anyway. At a certain point, Gil says something about intimacy as an important element of a relationship between two people, which might mean more than sex. But what exactly is in Gil´s mind, his intentions are out of the reader sight.
This lack of clarity about the intentions and the psychology of the criminal are a good incentive to keep reading the book. However, there is nothing coming out clear in the end. And the ending itself is a kind of unusual, with a very domestic story that keeps going on, regardless of Gil´s crimes: we are told about two of his crimes, were there more? What was exactly going on in his mind and why? Women hater, family trauma - although his mother is introduced into the story and it does not look as they did have any serious issue....
On the other hand, there are so many small psychological facts that are introduced into the daily routine of the characters which make the reading valuable and adds dimension to the women characters. The men appear rather as additional appearances yet noteworthy from the point of view of influencing the course of action, messy, confused and unclear in their intentions and decisions.
Despite my slight disappointments, Mishani looks like an interesting author, and I will love to come back to his detective series soon, hopefully in the original language.

Posted by WildWritingLife at 16 May