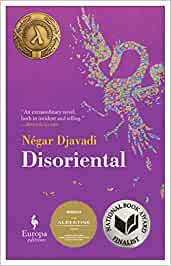 ´Believe me, no one misses the foreigners. No one can resisgt the cheap pleasure of scratching that itch of difference. Language is definitely the lastest way to catch them out and corner them, until the facade of normality they´ve spent a long, painful time acquiring cracks and hangs in shreds´.

Disoriental was written and published in French as Désorientale - a mix of two words: Oriental - coming from the so-called East - and désorienter - having lost one´s direction. Part classical immigrant story, part a historical account of a dissident family in Iran before and after the Islamic revolution, the story it is told on a nostalgic voice, addressing once in a while the reader directly.
Moving in a new country, facing the choice of a new language, leaving behind your identity and stories is an effort of re-aranging the identity pieces of puzzle in a new, completely different way. Memories are lost, re-evaluated, the identity is going first through a disitegration process,  before following new directions. ´No one who demand that immigrants make ´´an effort to integration´´ would dare look them in the face and ask them to start by making the necessary ´´effort at disintegration´´. They´re asking people to stand atop the mountain without climbing up it first´.
On a side note, not all the novels written by writers with an ´Oriental´ background should be necessarily compared to 1001 Nights/Scheherazade. Dear book reviewers from all over the English-speaking world, from NYT to other part of the USA, maybe spending extra time doing some serious research would help to avoid such painful literary stereotypes. Please, I bet you can do much better that to copy paste the same bland observations when it comes to appreciating authors and novels outside your limited comfort zone...
The youngest in a family of three daughters, Kimia Sadr is the daughter of Darius Sadr, an independent leftist intellectual whose articles bothered both the Shah and the dictatorship of the mullahs. Her family chronicle starts long before our current times, in Mazandaran province, near the Caspian Sea and ends in France, where the family settled after leaving Iran.
Under the overwhelming pressure of the personal history, her own sexual amiguities and the challenges of a new environment, Kimia is looking for her own way of expressing herself through music. No words are needed and it confers that freedom where you can rather lost yourself instead of being forced to assume and express a certain identity.
The novel is packed with historical and political information, when the voice of the author switches to the journalistic register. A welcomed addition especially for the readers not familiar with the political context in Iran in the last century or so, but I personally prefer the purely literary voice, also because it is so nicely nostalgically wrapped.
Disoriental is an intense identity story from a literary voice that would love to follow.
I´ve read the English translation from the original French.