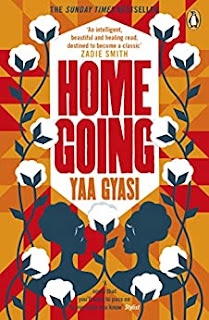 ´At night, Esi dreamed that if they all cried in unison, the mud would turn to river and they could be washed away into Atlantic´.

Human history across century has plenty of examples of the tragedies humans would inflict to each other. The amount of trauma carried on from a generation to another is hard to evaluate and the ways in which affects everyday life cannot be easily evaluated.
Homegoing by Yaa Gyasi is following a family history which starts in the 18th century in nowadays Ghana until the 21st century America. Effia and Esi are the two sisters whose genealogy is pursued through a tragical history, stained with the blood of the slave trade.
This cruel trade involved not only the colonial powers of the USA, the British Empire, the Dutch or the Portuguese, but was greatly supported by local actors who maintained the slave market and Homegoing is largely acknowleding this historical fact. The beginning of the story is largely taking part in this context and in my opinion is the most elaborated and coherent from the whole story. Violent encounters do outline the story and separate and connect characters and life encounters.
This narrative unity is largely lost in the next installments of the story, once we advance through the current historical and political momentum. The characters themselves are diluted and there are too many directions to follow - personal events in the life of the characters, political events and social outrage - to keep the story together. Technically speaking, unless one wants to create a big saga covering several volumes, it is impossible to focus properly within such an enormous time span. It is like you try playing a symphony by using only one, maximum 2 instruments.
But as the skin-based discrimination remains, so it is the strength of love which unites the main characters that are following the genealogy of the two sisters. It is not the romantic love or the hopeless love, but the enduring one, which is as strong as the pain inflicted by the lack of freedom and pure racial hate.
It took me a very long time to read Homegoing. I´ve started two years ago, then gave up, than started again while carefully reviewing my notes. I am aware that I must add some additional historical reading about the history of Ghana and the slave trade in general, therefore my focus is mostly on the aspects related to the literary side of the story.
Meanwhile the Ghana-born Yaa Gyasi wrote her second book, Transcendent Kingdom which is using the same historical and cultural context of her country of birth, that I am interested to read as well, therefore I better upgrade my bibliography.

Posted by WildWritingLife at 27 June