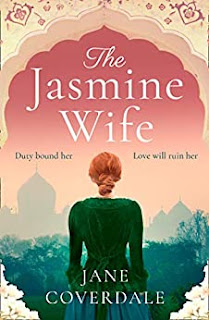 Set in India during the British rule, The Jasmine Wife is a cruel story of well-hiden family secrets, colonialist abuses and impossible love stories.
Most of the main characters do struggle with their own impulses and choices made under the influence of their strong feelings. Within the tragi-comical members of the Madras English-speaking community, one is supposed to rule and divide, mistreat their house helps and play the game of appearances. There is a safe world that was created, that Sara Archer, recently married witrh the district magistrate Charles Fitzroy is not obliged to protect.
In a very non-assuming way, at least at the beginning, she is getting close to her husband´s enemy Ravi Sabran, a mysterious powerful local character described by Fitzroy as a ´half-caste mongrel´. The stories of winning her independence from her husband, until the dramatic separation, and that of the evolving passion with Sabran are pushing forward Sara´s own reconnection with her Indian origins.
This part of the story, unfortunately, seems for me the most artificious one: although she left India after the death of her parents at an age when memories are relatively clear, coming back home does not mean for her automatically tracing her lost life. It takes an impressive amount of time until she will return to her childhood house and she seems not curious to clear her personal history.
Despite this shortcoming, The Jasmine Wife is a passionate story of impossible love meant to be, about tragical political realities and women emancipation. In a time when colonialism and racist policies are brought again into the limelight, it is time for at least a literary meditation about how the colonialist empires operates within the territories they took over. The meaninful ways in which a love story was inserted in this context is the merit of the author´s writing skills.

Posted by WildWritingLife at 12 June