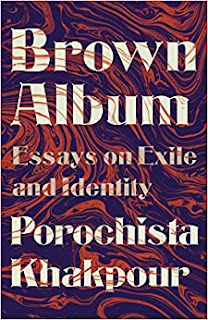 The Essays on Exile and Identity included in the Brown Album recently published by Porochista Khakpour are an interesting genuine journey of coming at terms with a constantly changing perception and acceptance of identity. Being other in America - and elsewhere - requires a long travail that involves some risks: your assigned group may not accept the final results, you may not be happy with the roles assigned, the majority would have different expectations - culturally, gender-based, economically - from you as inherently associated with your group - ethnic, cultural, other.
´I was brown, bisexual, from a Muslim background, of the dreaded Middle East, of the even more reviled Iran, always poor from parents who were originally not poor and then had become very poor´, a daily life within so many margins.
Like her memoir of living with chronical illness, Sick, I could not easily put down the The Brown Album. First, there is the constant exploration of a specific identity in the making, against all odds and branding associated, especially in the post 9/11 America. On the other hand, this unique story has to do with an everyday experience many of those dislocated for various reasons from their country of birth may resent at a certain point. Of course, some ethnic groups are more demanding than the others, and some countries are more or less oblivious to the identity appropriation - religious, linguistic and/or cultural.
Khakpour was born in Tehran, in a family belonging to ´academic aristocracy´ - her father was involved in the development of the atomic program and her great uncle is Akbar Etemad, considered as the father of Iran´s nuclear program. Forced by the post-revolutionary Iran political circumstances to leave the country, her family considered for a long while the American journey as temporarily. The life in America is a reverse of fate and social status, as they do not belong to the so-called Therangels based in the rich part of LA. On one side, the glamorous Iranians: ´Here all the base materialism purged by the Islamists could upchuck ebulliently like a Disney-lit confetti-bomb blitz. Thbey were safe´. On the other side, her family: ´Old Iranian aristocrats stuffed into a tiny crummy suburban apartment with nothing to show of their pedigree but the insanity of those who once had everything and were forced to abandon it all, almost overnight´. Stories that are often replicated in different languages and cultures, at least for the first generation of immigrants.
Khakpour´s first escape and the beginning of a new cycle of identity redesign is once she is leaving for NYC to study creative writing at Sarah Lawrence, an experice she describes as: ´To me, I thought it could be a place where I could pile on identities as if they were pizza toppings, cheap and fast and easily pickled off, but hopefully so amply loaded that who I actually was could be, for once, truly obscured´. In the end, she will be fully at home in the NYC nightclubs: ´Electronic music and its physical incarnation, the rave, was a tempting and great equalizer´.
Porochista Khapour journey of defining herself is a courageous attempt to deny general lines and look for those specific descriptions that fit individual stories. We may move within defined limits and cultural expectations, but what about taking the courage of defining ourselves first as individuals described through genuine features than based on general categories? Such an approach is a matter of psychological comfort that is not easy but it´s almost an intellectual obligation.
After the two memoirs, I am looking forward to read the novels Khakpour wrote, including her incoming one dedicated to Tehrangels. I love her courage and her intellectual vibe very much.

Posted by WildWritingLife at 07 June