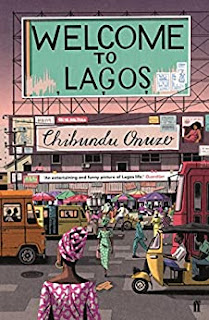 ´Befriend the First Lady. Buy her purple things. Purple bags, purple Benzees, purple houses in France. Depends how much you want it´.

Set in Africa´s largest city, Welcome to Lagos is a tragi-comical take on the ambiguity of a corrupt system made of and supported by people with loose loyalties. Among them, the Sancho Panzas of kindness, like the protagonists of the book: the two Army desertors, Fineboy, Oma and Isoken. When they caught the fugitive minister of Education Remi Sandayo, who took with him 4 million dollars from the fund dedicated to schools, they decide instead to use the money for the school that were deprived from being funded.
The journalist Ahmed Bakare the founder of the Nigerian Journal, the son of a proeminent representative of the oil Minisrty, who left behind a business career in London to pursue his media dreams in his home country, is also a dreamer, as he expects to save both his newspaper and his journalistic honour by interviewing Sandayo.
But the laws of corruption operate similarly everywhere and there is no place for innocents and dreamers. Ironically, the naive outsiders rarelly make the right distinction between the real vilains and the real god-doers. Ambiguity, cruelty and irony are often part of the everyday perception of people leaving under corrupt systems: the scale of values is reversed, morality is contextual and choices are dictated by social pressure and accidental circumstances. It can happen in Nigeria, in the Balkans, in the Middle East, but it affects/corrupts at the same extent the humanity of the people living under such conditions.
Largely inspired by real persons and facts - the 234NEXT who shot down after two years of publication in 2011, for instance, served as an inspiration for the Nigerian journal - Welcome to Lagos has an big cast of characters, utterly human and entertaining, yet tragical sometimes in their loneliness. They have a dream or two, or they just saw so much injustice and aim at something different, but did they know that the best way to get away with your dreams is in a big city? ´Lagos was a jungle, an orderly ecosystem with a ranked food chain, winners and losers decided before they were born´.
Welcome to Lagos is a window to a world where the sense of humour and weird irony help to survive when nothing is left for countering the unbearable heaviness of the bribes. Nigerian-born, England-based Chibundu Onuzo found the right voice to express this unique story.

Posted by WildWritingLife at 07 June