Bringing Luck to Others 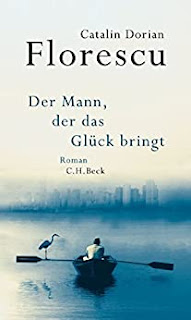 I will take the freedom to translate the title of my latest by Catalin Dorian Florescu, the Romanian-born Switzerland-based author brilliantly writing in German, Der Mann, der das Glück bringt by The Man that brings good luck to others. This is what an author/artist is or must be: someone that makes other people lucky, if happiness can be considered a matter of luck, among others.
This was my first novel by Florescu (read in the original German language), an author whose works I am interested to discover, after being pleased with the collection of short stories I´ve read a couple of months ago. This new novel revealed that Florescu not only is a charming storyteller, but he is also an excellent German writer, with interesting linguistic turns that adds an exquisite touch to the story.
Ray and Elena meet in the 9/11 New York in an unusual context. She is in America on a mission: to bury the ashes of her mother, who died in the leprosery located in the Danube Delta area- which according to the 2018 local news is still operational for around ten people. Elena, now in her 40s, never knew her mother and father, both inmates in the leprosery, as she was shortly after birth took away an placed in one foster family after the other.
Ray has also a rich family history behind, with an adventurous grand father who landed ´from the Moon´ on the NYC shores growing up in the multi-ethnic boiling pot of Irish, Italian and Jewish immigrants at the beginning of the 20th century. His grand father, who took the name of Berl (but without being Jewish) sometimes, sometimes Paddy, used to have a great, Caruso-like voice, and was considered the one who brings good luck to others. His grandson is just living in the shadow of his great stories but unable to fully live his life, at least at the same risky and full dedication his granfather used to have.
There are similitudes between the two stories, although shared from two very opposites corners of the world, because, after all, it has to do with human beings and their dreams, broken expectations and sadness. Interestingly, in both cases, the general historical contexts, like WWII, for instance, is randomly mentioned. In the Danube Delta villages, Elena´s grandfather and his friends got the news a couple of days, or even weeks later, but did it really matter for them when exactly Rosa Luxemburg was assassinated? The fact that the two of them are meeting when the Twin Towers were hit is also a short mention worth, for the overall context and because Elena´s jar with ashes opens up and her mother ashes are mixing with those of people being killed in the terrorist attack. Life is going on when you are small enough to be out of time and your life is set on survival mood.
The stories from Der Mann der das Glück bringt are very powerful and eventful and it is hard to put the book down or thing/read anything else until the end. However, I had sometimes the feeling that many of the ideas and stories or plot ideas to need even further development that for the sake of the unity of the story were abandoned. When you simply have too many stories to tell it is, indeed, hard to give up, but for the reader it creates expectations and makes you long for more. I, personally, will look reading more books by Florescu, because I really like this writer.

Posted by WildWritingLife at 26 June