How Many Quichotte/Quixote Do We really Need? 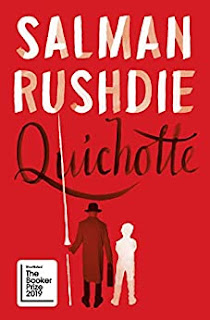 Do we really need to re-write and re-contextualize classical - successful works of literature or rather keep telling new stories addressing the contemporary issues pertinent for new audiences? Can it be that that time has come when no matter what was written before, the topics and characters can be re-used and sometimes abused too but having already lost their original meaning?
In visual arts it is easy to re-organise various fragments of a work of art into a completely new arrangement. When it comes to words, I am not always sure that the stories are interchangeable.
I gave a chance to Quichotte by Salman Rushdie - read in the German translation - because I appreciate the author´s qualities of storyteller. The book - shortlisted for The Booker Prize last year - is built around the original Quixote story but with a different casting and in a different world. The hopeless romantic is an Indian wandering across America in our days, accompanied by his son, Sancho, obsessivelly dreaming about a young TV star of Indian origin, Salma. Himself exists only as the work of fiction of the author of his story, Sam duChamp. This direction is conventional, over-used but the interaction author/characters was for me one of the most important development of the book.
It sounds unfair especially when the book promises to cover ironically the big issues facing America, including the opioid crisis and the excessive use of firearms. There are plenty of references to sci-fi movies and Mayflower - the first ship that transported Puritans from the Old to the New World - is featured as a portal where an experiment involving the Schrödinger cat - but using a dog instead - is more than a historical reference.
The stories are flowing and once in a while I got completely lost into its intricacies and ironical references. But when I was stepping out of the story myself, there was nothing intellectually appealing enough to call it a big good story. What is the point to try rewriting a story when there are so many other original stories already waiting to be told?
I will continue reading Rushdie - the storyteller - after Rushdie but for me, Quichotte is a failed experiment.