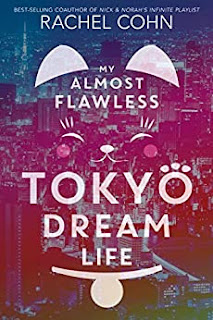 A rags to riches slow paced YA novel, My Almost Flawless Tokyo Dream Life by Rachel Cohn explores relationships between lonely children and estranged, broken and addictions-prone parents.
Although the topic itself is very tragic, the author is able to create a story which is drama-free. Elle Zoellner, the daughter of a drug-addicted mother who ended up in prison, spent most of her teenage years moving from a foster family to another. Adulting haven´t influenced considerably her nature and her interests remained focused on school. On her 16th birthday she will receive an unexpected present: her father of whose existence she was not aware before is ready to offer her a new life, in Tokyo, where he is a very successful businessman belonging to a prestigious family. He had met Elle´s mother during his studies in the USA but had to leave her and her daugher in order to answer his family obligations.
In 24 hours, Elle is starting a completely new life: she is about to leave her precarious life flying business class to Tokyo, her first time in an airplane and out of the States; she is enrolled in a high-end private school, having as colleagues children of rich expats and local personalities; she will leave in a luxury hotel in a new country.
Her experiences in Tokyo are part of the usual ´culture shock´ of the European, Western traveller to Japan and the places she is discovering with her ex-brats group covers the usual travel attractions in the capital city - Robot restaurant, cat cafés, Shibuya, karaoke venues, sushi (actually not your local everyday meal) etc.
At one level, Elle is trying to connect with her new school environment and making new friends - very fast and unproblematic - while working hard to be accepted by her new family - which is not an easy task, especially when it comes to her grandmother. Her Japanese part of the family, including her father, are cold, work- and business obsessed and by default, they seem to use her as a mean to network as well, through her fancy school mates. After all, it seems that even though she and her mother were poor back in the States, and her mother had to work long hours to cover their financial needs, at least they had a daugher-mother connection that it´s more complicated in the case of her interactions with her father. Instead of being a rebelious child, Elle is rather eager to avoid conflict than to jump to direct confrontation. She is moving within a safety area and even when dramatic things are happening, there is always place for negotiation.
The story is simple and the characters themselves are uncomplicated, no matter what challenges ahead. More complexity - both of the story and of the characters - would have make the novel more interesting. For instance, there is mentioned at the beginning that Elle has, on her mother side, a mixed Native American, African American heritage, which is not further explored.
My Almost Flawless Tokyo Dream Life is an enjoyable read but I wish the story is just a bit bolder.

Posted by WildWritingLife at 19 June