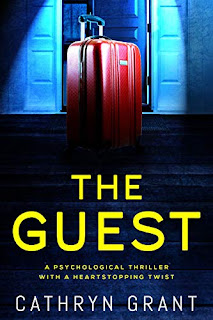 ´Sometimes people are forced into things that might seem wrong to most. But until you live it, you don´t know´.
It takes a lot of reading practice to get used with a domestic thriller. I must reckon that I still need a lot of patience to follow the characters and the slow paced installments of the story until the very end. An end that most likely is worth waiting for, as helps to see the entire story into a completely new light. This, if you are patient enough to wait until then.
The Guest by Cathryn Grant is one of those books when every couple of paragraphs I was questioning every single detail of the plot. In full honesty, I was not necessarily happy with the story, for most part of the reading but this changed for the good shortly before the final dot.
I had put down a long list of questions related to the evolution of the story:
Why, for instance, Ellie, the storyteller, has such a slow reaction after being revealed that her husband, Seth, was lying on her for good couple of weeks ? Why Ellie, again, was so easy in accepting a guest into the house that was supposed to live there undefinitely? What about the awkward - for me - family dynamics and the lack of communication between the husband and wife, especially when it comes to Brandon, the teenage son, a victim of school bullying? What kind of mother is this Ellie that after her son is taken for interrogations at the police station in a murder case is not making any single effort to find out the whole circumstances of the apparent involvement of the son? At a certain extent, the teenage drama unfolding has a good story potential, with the children/teenage characters being one of the best and clear protagonists of the plot. Although I tried, I did not fancy too much the first-person account as on one hand it is too monotonous, and on the other hand, it takes away a significant potential from developing the story on different levels and plans. A multiplicity of voices telling the story creates, in my opinion, a complex development of the intrigue.
All being said, I may confess that until the end of the story I had rather dislikes about the entire story. The characters had a potential of being real enough, but somehow their features were lost in the subjective first-person account. But I was proven partially wrong and waiting until the last chapters was worth it.
The final pages are the most important part of the book, adding those much expected clarifications to the story and the real psychological twists I was waiting for. Once you finish the story, you feel like you need to reconsider completely the whole story and even to come back to some details for a better understanding. After a couple of hours of relative frustrations, it made me appreciate the power of patience, including when it comes to my reading projects.
I may not be ready yet for another domestic thriller but The Guest by Cathryn Grant proved to be a good introduction into this niche genre of the wide category of psychological thriller.

Rating: 3 stars
Disclaimer: Book offered by the publisher in exchange for an honest review
Posted by WildWritingLife at 01 June