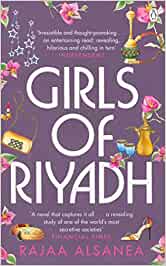 I am not sure what I would have think about the Girls of Riyadh if I would have read it when the story of four non-conformist young women growing up in Saudi Arabia was published at the beginning of 21st century.
Initially the book was forbidden in Saudi and instantly become a bestseller in Lebanon - a realm that is mentioned as an alternative space of freedom more than once in a book, and not only for the nose jobs and other plastic surgery interventions enjoyed by the Middle Eastern women, but also because, for instance, you can find there books on various topics, including the works of Freud. The controversy around the author, currently a medical practitioner living in the US, increased considerable its popularity among young women and men in Saudi Arabia.
I personally approached the book - read in the German translation - very carefully, curious to find out about the literary qualities or at least some interesting story. At the time, without the protection of a male relative, women were unable to achieve anything outside the walls of their homes. Although nowadays the situation slightly improved - women can drive, for instance - there is still a long journey towards a welcoming environment for Saudi women.
Girls of Riyadh is set as a weekly email exchange based on the adventures of four young Saudi ladies, in their attempts to adapt Sex and the City narrative to the secluded world of Riyadh. The book is not supposed to be a collection of philosophical/methaphysical considerations about the West versus East lifestyles. Those girls are from families with a high income, eventually with lavish properties in London, interested in following a professional career but at the same time resigned to give up once they will get married. Marriage is mostly arranged and although some romance seems to be allowed, the enthusiasm is easily cut once the match is evaluated from the point of view of the personal/social/financial status.
Each chapter starts with a quote, from various sources, including a couple attributed to Socrates, which I have some doubts they are really genuine - as poor Socrates haven´t write anything and his thoughts are mostly assumed through Plato´s words and works. Such a choice gives an intellectual air to the story but otherwise expect a lot of forbidden love - for the Western reader might sound exotic, unusual, ridiculous even to know your future husband or/and wife in an arranged setting - and desire. The girls do dream about romance and sensuality, inspired by the freedom of chatrooms where anyone can hide, but at the end of the day they are not left with too many choices, one of the most common being to disappear for a while in the US, London or Dubai.
How exactly those women want to be free? Champagne drinking, and dating someone of one´s choice, spending money as they wish or randomly hanging up with strangers. I can understand that there are people looking for such achievements, but I am rather interested in more complex situations and choices. Not every forbidden apple has a taste.

Posted by WildWritingLife at 17 June