The European Novel - The Capital by Robert Menasse 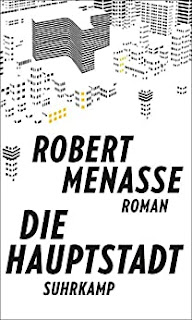 Why until The Capital - Die Haupstadt, read in the original German version - there is no other  novel dedicated to the EU life, work and fantasies? Despite the generous source of inspiration that the European Union and its various institutions can offer, there was no writer keen to write European novel in the institutional sense of the inspiration until Menasse.
And what a generous inspiration EU it is, in all possible senses...
Written with irony, sarcasm and concern, The Capital is a chronicle of the everyday life of the Babbel of languages, people, departments and institutions of the Union. Out of a daily routine and bureaucratic assignments, Menasse - that moved to Brussels for long periods of time in order to properly research the enormous European octopus - created a multi-layered story. A story populated with a multitude of characters, from the bureaucrats working in different departments and institutions,  to Vatican secret agents, academics and Holocaust survivors.
This mishmash of people and ideas is Brussels. The European capital that, in Menasse´s book and in reality, is looking for a symbolic reboost. While EU is trying to figure out the details of the ceremony dedicated to the Big Jubilee Project, the local media are concerned about a pig on the loose, appearing in the most unexpected moments and city locations. At the same time, a crime is committed in a hotel, perpetrated by a Polish Vatican secret agent - this thriller part of the book is in my opinion the weakest chain of the story, as it does not have enough space to evolve as a proper crime investigation and it is easily obliterated about the other evolutions of the other stories.
For the entire duration of the book, the characters are moving from a story to another, their personal and professional stories intertwinned more than accidentally. Out of a relatively complicated real-life structure, the art of the writer created a story that you want to follow, especially if you had to deal more than once with the EU. The characters are authentic, molded after the thousands of the bureaucrats filling the many rooms of the Brussels institutions.
In addition, the novel launches a big - troublesome - question, especially following the latest Brexit shake-up: what is the basis of Europe? What is the vision of Europe nowadays? Does it correspond to its original aim, or to the expectations of its citizens? And after all, what does it mean to be an European citizen? And more than a suggestion: give more place to regions and local identities, instead of the national ones, often the result of circumstatial geographical and political decisions but without a proper realistic identity touch.
The idea of the book, expressed by Menasse on other occasions as well is that the focus on the institutional - economic, technical - layer of the EU kidnapped the original sense of the united Europe, as it was founded on the ruins of the WWII: a cultural realm, a space of intellectual and spiritual unity. The suggestions of changing the capital of Europe to Auschwitz expressed by the participants sounds - although extreme and grotesque at a certain extent, but it is part of the dark comedy featured in the novel - as a last desperate reminder of what Europe faced in the aftermath of the war.
Awarded the German book Prize, the equivalent of the Man Booker for the German-speaking realm, Die Hauptstadt is a captivating black comedy of self reflection about a continent in a world in crisis. A welcomed creative addition to the political and bureaucratic discourse in general. Looking forward for more courageous creative takes on the current ongoing European affairs and crisis.

Posted by WildWritingLife at 08 June