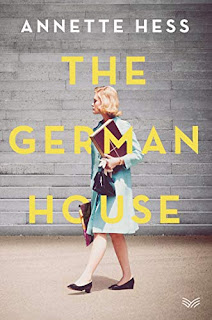 ´I knew nothing! Saw nothing! Did nothing! That is beyond my knowledge!´
I am approaching with extreme caution historical novels by German authors based in Germany, dealing with post-WWII coming-at-terms with history. In general, I avoid to read too much literature on the topic, as I consider that the historical facts I am familiar with are already enough for a lifetime of nightmares. But as I am living here, I am becoming more and more curious to see the symbolical and mentality interpretations and reading of those events.
The German House by Annette Hess - a book originally written in German, that I´ve read in the English translation by Elisabeth Lauffer - deals with the Frankfurt Trials, that took place in the German town between December 1963 and August 1965. 20 years after the end of the war, 22 people were brought to justice and eventually condemned for their role in the mass murders commited in Auschwitz-Birkenau. The German House is Hess´, who authored the screenplays of popular TV series like Weissensee and Ku´damm 56 - first novel.
One may ask how come that during the previous two decades nothing noticeable happened for bringing to justice the culprits for million of deaths. Many of those involved in various levels in implementing the ´Final Solution´ resumed their ´honorable lives´, like the protagonists of the trials - both in the book and in real life. Konrad Adenauer, the first post-war German chancellor insisted to abandon denazification for the economic reconstruction of the country. The country advanced economically, indeed, while the moral wounds and trauma remained. The Frankfurt Trials were prompted following the solid documentation sent to the Hesse court by a journalist. The 700-page report reopened a discussion about the terrible guilt that apparently the German society preferred to elegantly obliterate for decades. However, it gives me existential fears to hear more than dozen of times the opinion that the past should stay in the past as there is nothing as simple as forgetting a generational trauma - which affects the perpetrators as well, although in a different manner.
The German House is the name of a popular restaurant serving German food in a neighbourhood with bad reputation in Frankfurt/Main. Ludwig Bruhn is the owner and the chef and together with his wife, Edith, dealing with the inexorable advancing of age, they have two daughers of marrigeable age and a young son: Eva is a German-Polish translator and Annegret, a nurse in a pediatric ward. Eva, whose Polish knowledge is not clearly explained in the book, is requested to be part of the team of translators working for the trials, an experience that will upside down her middle-class quiet world as she is facing a past her family does not want to remember. Her curiosity and stubborn desire to know the truth is facing the overall lack of interest among the rest of the German society. In the words of Eva´s mother: ´It´s terrible what happened in the war. But no one want to hear it anymore. And why in our city, of all places?´
Personally, I still cannot fathom how you can still go to sleep quietly in your bed after you´ve witnessed or perpetrated crimes against innocent children, to say the least. I cannot.
Eva is a very complex character, whose dramatic discovery about her past and her family involvement in the WWII crimes, leads to making choices. The encounter with evil cannot leave anyone unscathered. But evil, at a petty level, is relatively a reality of the everyday life in The German  House: from the secretary who is writing lies in an anonymous letters to the landlord about a tenant she does not like, to the Annegret who is infecting new-borns with e.coli or the youngster putting on fire baby strollers. A matter of personal choice as in the case of the person who decides to end supporting or doing evil or of the network of lies we may build ourselves to justify or hide deep into our consciousness the genuine evil.
Annette Hess, who intensively researched in the archives for documeting the book, creates a complex net of problems and moral responsibilities involving everyday choices between good and evil. The intellectual and moral part of the book is straightforward and intense and I largely enjoyed it.
My big problem in reading the book was sometimes the insidous switch from a scenery to the other which may work very well in screenwriting and visual settings but in novels can create confusion.
In addition to historical and other non-fiction sources about and representations of the post-WWII Germany and the issue of war culpability, The German House is a good source of documentation for the history of recent mentalities.