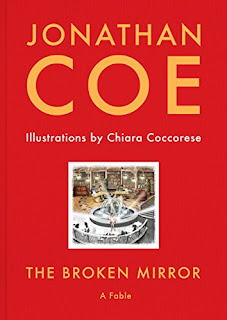 The Broken Mirror is a completely different yet fully literary enjoyable work created by Jonathan Coe, an author I am always delighted to discover.
It was first published in Italian, French, Greek and Dutch before being translated into English three years ago. Considered ´A Fable´ it is more than a children - midgrade level - book as it deals with the ginger balance between dreams and reality, real world versus the power to dream the change.
It is located in the town of Kennaway, a real town in Fife, Scotland, where Jonathan Coe´s grandgrandparents used to live, but as the author himself explains, there is no connection with the real place.
Claire, the fictional character of The Broken Mirror lives somewhere in England. As a child, in a garbage heap, she finds a fragment of a mirror that projects the creations of her imagination into her real world. ´How could something that she could see so clearly not be real? How could the mirror be showing things that were twice as exciting, a hundred times more magical tghan the dull, wokaday world that was all around her?´
Year after year, she is facing the pangs of growing: discovering the injustices of the world, being bullied in school, retreating in her world from her quarelling parents, feeling in obsessive love with a guy who utterly ignore her. Around her, there is a new world expanding, where the small stores and libraries are destroyed for the sake of ´great´ real estate projects encouraged by a mayor that pretends to put the hometown ´first´. Immigrants are the target of street attacks.
She mostly ignored the fragment of mirror that makes the world better. Until one day, when Peter, her secret admirer, shares with her the secret of his fragment of mirror. And they are not alone, it seems that there are more and more people that together, will try to put the fragments together trying to show ´how the world might look if it was a better place´. What one can see in the full miror is in the eye of the beholder.
The Broken Mirror is an encouraging read in dark times, both political and generally human. It relies upon us the power to hope and to do not give up the checking once in a while the projection of our worlds into the mirror. It helps although it might not change the surroundings - not right now.
The illustrations, by Italian artist Chiara Coccorese are collages, which is such an appropriate way to introduce dreams and wishes. Aren´t they made of disparate fragments of ideas, concepts and projections?

Posted by WildWritingLife at 25 April