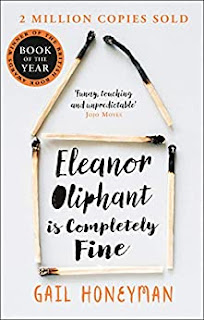 A young woman in her early 30s that ´aspire to average´. With a simple lonely life, a stable job of nine years in accounting and apparently a lot of secrets. The kind of person that at the first sight you will find it weird, with her elaborated vocabulary and limited social skills. Also her appearance does not help to make her more ´normal´.
But suddenly, there are things coming up and happening in her life. Eleanor Oliphant had a crush, developed a kind of dialogue with the new guy from IT, together they save an old man who had a heart attack on the street. ´Life felt like it was moving very fast indeed at the moment, a whrilwind of possibilities´.
Still, Eleanor´s life maintains some given schedule and habits. There is the Mommy´s toxic call every Wednesday, and some gulps of vodka every weekend.
But her secrets, very slowly are to be revealed in the ways familiar to crime and mystery thrillers. There is a 5% thriller in this story, but more it has to do with human simplicity and fragility. The pace of the story might look a bit annoying and the curiosity to have the truth and nothing but the truth revealed is not easily satisfied. At a certain extent, the story goes as slowly as a serious therapy session goes. Not clear from the very beginning, with many waiting time in-between, in dire need of many intermediate moments and dialogues until the trust is settled and more traumatic things from the past can be extracted.
The style of the book is very personal and invites the reader to be part of the story. The empathy is tested. As in the case of Eleanor´s co-workers who are so rude and lacking any empathy, we, the readers, may have a little fun of the strange wordings and the unusual behavior Eleanor exhibits. And until the end of the book, we are about to learn a lot about respect and towards the unicity of pain of every human being.
The end is surprising in a way, but with mostly a predictable happy ending. Wouldn´t be so beautiful to learn thus to be more kind and less judgemental towards each other?
I reckon that I did avoid this book for a long time, as I am relatively skeptical about recent popular representations of mental health issues in literary bestsellers. Instead of creating understanding and insights, it brings otherwise serious things to a kitsch-like dramatization that does not do any good to knowledge. I am aware that issues like manifestations belonging to the autism spectrum, for instance, do deserve a better representation in media that might lead to a increasing the tolerance towards those bearing such a diagnostic. But I personally prefer approaches that shed a complex light into the issue instead of being sold a simplified idea that suits very well ´feel good chick lit´ but it is outrageous from the point of view of people suffering and their families.
Elisabeth Oliphant is Completely Fine stands to its fame and I am glad that I had the time and energy to spend my first half of the day in its company. It encourages me to keep fighting hard against being judgemental and opening my heart more often towards the pain - especially the spiritual one - of other fellow humans.