On Travels in the Time of Trump 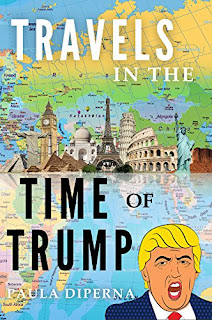 At the very first sight, it is very frustrating to be taken accountable for the politics in your home country. What is your fault that the majority of your countrymen and women decided to vote for someone that not only does not make sense from the point of view of global leadership, but exhibits a toxic mix of alt-right, sexism and intellectual incapacity to understand basic concepts of public accountability - like, for instance conflict of interest? However, when you are represented by such a character at least a little bit of worries and questioning your ´national soul´ should follow because, at the end of the day, it has to do with your present and future. In other words, can you - or how can you - live in a country that at least for the next four years will be moulded based on the political choices of such a president and his well chosen team?
Paula DiPerna is a strategic global environmentalist, writer, political writer that run for the US Congress on behalf of the Democrats. She was involved on behalf of Hillary Clinton and has the occasion to know some areas of the ´deep America´, that, not so surprising, given the political context of at least two decades - poverty, industrial decline among other causes -, voted for Trump.
The result of the elections requested a moment or two of coming at terms with the reality, she wrote. ´(...) for many of us who call the USA our home, Trump´s election felt like a moment of deep soul-searching. How to spend these four years? More ceaseless opinion making? More noise? More critique? What?´
DiPerna did not have too much time for reflection though, busy commuting all over the world, either professionally or visiting friends. London, Paris, Morocco, Amsterdam, China, South Korea, Thailand, South Africa, Finland, Germany. She travels across borders and languages, often being pitied by taxi drivers or random encounters for coming from Trump´s America.
Sometimes she shares historical and cultural details about the places she visits, sometimes she is just out of time for more than a business meeting and changing airplanes. Her Travels in the Time of Trump are often hectic, like trying to get herself tired enough to forget about what she is running from. This is also a way to deal with such a situation, but the soul searching exposed at the beginning is rather forgotten because the travel fever gives you a certain strength and illusion that you belong to the global world and nothing can get worse. You feel yourself a global citizen, although with a lucky passport in your pocket, no matter who is living at the White House for now.
Honestly, I was expecting more political focus and eventually, some interesting reflection on the causes and consequences of those times. Indeed, I am the kind of reader and traveler that believe that the priviledge of travel brings higher responsibilities. When you have the chance to see so much of the world, why not understand how important freedom and human rights and accountability are and fight for them with all your might back home? Otherwise, dropping capital cities and global meetings doesn´t impress me at all.

Rating: 2.5 stars
Disclaimer: Book offered by the publisher in exchange for an honest review
Posted by WildWritingLife at 19 April