Book Review: The End. And Again 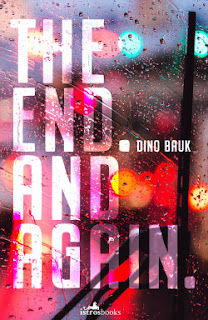 ´(...) ahhh, forget it. You wouldn´t understand about Kosovo anyway´.

There is a fragment in Mémoires d´Hadrien by Marguerite Youcernar which says that in-between the periods of big historical change, there is a certain moment of inertia which encapsulates a wide range of possibilities. It´s a moment of perfect freedom that disappears once choices are made and directions are followed. It happens to people, it happens to nations.
The End. And Again, the debut novel by the Slovene author Dino Bauk , a former civil servant, lawyer and writer, published by the exquisite Istros Books is about one of those magical yet risky moments, both at personal and historical level.
Goran, Peter and Denis are getting high on books, rock´n roll and girls while the former Yugoslavia is crumbling into little pieces. ´Berlin Wall was already in ruins, students lay dead on Tiananmen Square, and the East of his country was in threatening convulsions´. They were lucky enough to live in Slovenia, the most peaceful separation from the federation.
Denis family was not local though, therefore, upon a night police control he is caught up as an illegal and deported to a reality where his art studies and love for books are replaced by Army fatigues and Kalashnikov.
Years after those events, what happened to the members of the youthful gang? Mary, a former Mormon missionary that had a short adventure with Denis who left behind her religious limitations enters the story. As her relationships and career fails, she is looking for Denis. Goran and Peter are also trying to write him imaginary letters. Was Denis killed in the war(s), ´somewhere in the Balkans´? What happened with all their dreams and love for books and music? Both Peter and Goran are enrolled in relatively uneventful, non-spiritual daily lives, with their share of failures and glasses of alcohol.
The back and forth down the memory lane is punctuated by Paul Auster-inspired dreams about bombed libraries that have to be saved from the rain - let´s move the literature to the sheltered floor and move all the economic and politcal books to the level exposed to the downpour - a 24/7 Balkanica libraray, library from the future, from 2002, with books by Hemon and Albahari.
But it is not enough and books cannot stop wars - best case scenario they can start it. The destinies of Mary, Denis, Peter and Goran got erased into the waves of time.
The book is relatively short although with a high concentration of historical facts and symbols. It is a reminder - for those who know the history of this now forgotten slice of Europe - how wars and conflicts start and how humans were murdering each other based on ´tribal´ affiliations in the very close vicinity to Europe. We are rolling our sensitive eyes when we hear about Syria, Yemen and other hot spots far away from home - it´s so convenient to care about those places because really, how can we go there, how can we understand their culture, we also don´t speak their languages - , but what about the mass graves from the Balkans?
I personally got into the story and follow along, but was relatively unimpressed about the characters as such. They, all of them, including Mary, do have a similarity, including in the ways they think and write which doesn´t have to do with their common memories. I would have love them more personalized as literary characters, for the sake of an even stronger story.

Rating: 3.5 stars
Disclaimer: Book offered by the publisher in exchange for an honest review
Posted by WildWritingLife at 25 April