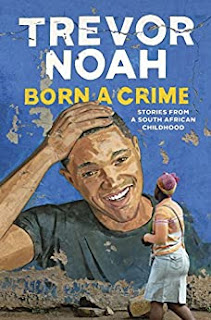 Trevor Noah, the popular host of the Daily Show was born ´a crime´. He is the child of a black mother and a white father, a relationship incriminated in South Africa during apartheid.
His collection of short memoir-like stories published under Born a Crime is an account of his life before and after apartheid, the permanent confrontation with the violence - within the society and within the families - that was always ´lurking and waiting to erupt´. As a first person account, the stories have a note of authenticity and represent important testimonies about a racial divide that we read about but we might have difficulties in figuring out on a daily basis.
Noah´s identity was caught between the various racial projections and representations that took place during the apartheid years. A multicultural and multilingual society was forcefully divided into ethnic and linguistic groups that were hating each other and preferred to live in clusters that refused to communicate to each other. Neither fully black or fully white, Trevor Noah was considered ´colored´ which involved regular bullying and a permanent outsider status. His greatest advantage was her mom who despite all odds and limitations educated him to not believe in limits: ´My mom raised me as if there were no limitations on where I could go or what I could do´. As for his outsider status, the one who was mentioned by TIME in 2018 as one of the 100 most influential people in the world, he succeeded to migrate between worlds, get to know them and talk their language: ´I learned that even though I didn´t belong to one group, I could be a part of any group that was laughing´.
There are a lot of hilarious episodes, but also way too much violence and domestic abuse, with his mother one of the victims. As a personal story, Born a Crime offers a lot of anthropological and cultural inquiries into the various South African ethnic groups.
Personally, I find Trevor Noah more inspiring as a TV host and comedian, as the writing is not sparkling, but there were enough information that keep me interested until the end of the book.

Posted by WildWritingLife at 01 April