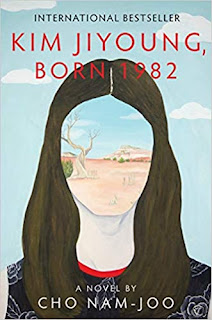 A monotonous man´s voice is reading the story of Kim Jiyoung. Born in 1982, in South Korea, a country with the highest rate of university graduates in the world but still with the highest pay gap among OECD countries.

The novel published by Cho Nam-Joo in 2016, her third, but the first to get such an international fame, was on the forefront of the South Korean #MeToo movement, encouraging personalities and women from all kinds of backgrounds to publicly acknowledge their frustrations against the permanent harassment and mysoginistic encounters. Against the traditional family structures that keep women from reaching their potential.
While I am listening the man´s voice though, I think I have a déjà-vu (or rather entendu). We, in the so-called ´West´ we pretend that we are far beyond the historical moment when discourage women to have positions of authority, send them home to take care of the children, cut their professional wings because of their gender or discourage personal contacts - as in touch - in exchange of professional promotions. No? Is it really true or we rather pretend it? Do we really valuate our daughter at least as much as our sons?
Mental habits, especially those perpetrated from a generation to another are hard to erase. They need to be replaced by new patterns that need time to become part of the mainstream mentality and behavior. And if/when the patterns are not replaced, they can be extended and made comprehensive in order to accomodate changes within the society. For instance, síngle mothers, single working mothers.
Kim Jiyoung, Born 1982 is coping actually with problems that we, here in Europe, deal with too, although at a lesser extent (we don´t end up leaving with our ailing parents, for instance, and we gave up in most schools the opressive dress codes for girls and boys). How many new mothers are going through mental pain coping with the pressure of juggling with being mothers and keeping their jobs and a career. Not everyone can afford a babysitter or two and freelancing is a last resort although not the most stable one. How often people around those mothers are uttering their disbelief that those women are actually ´good mothers´ only because they insist to go on with their professional lives as well. Women fighting against social structures that do not let them go on with their lives, because they are not designed for non-traditional structures (like, for instance, not providing child care covering the usual working hours).
If you are not strong enough to go on, and you start behaving differently, your spouse, friends and relatives assume you are sick. Mentally sick. Like Kim Jiyoung.
The traditional story of a society praising boys as source of money and honour to the family is not very unusual either. In Asian and Middle Eastern societies it is common occurence to have different rituals and much louder celebrations for the birth of a boy. In the ´West´ we cut short those details, but still we will hurry up to give to a male a position of responsibility.
Kim Jiyoung, Born 1982 has a very high documentary value. It is a local wake-up call, but it has to do with women, in general. The book is part of a wider discussion that has to be maintained and amplified because there is no other way towards change. And if change is not possible, at least in order to show women from all over the world, with access to reading, that they can raise their voice, write, talk, tell their stories.
I´ve listen to the audio book and I would have prefer a woman´s voice to tell the story of Kim Jiyoung.

Posted by WildWritingLife at 24 April