Book Review: A House for Happy Mothers by Amulya Malladi 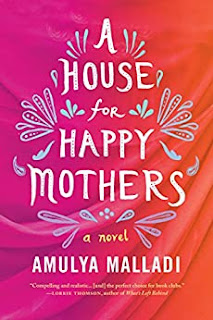 To be honest, I have very conflicted opinions about this book. I am familiar with Amulya Malladi´s writing from a previous review that I published a couple of years ago, when I enjoyed both the topic and the writing. The Copenhagen Affair was the kind of smart, well written book that is pleasant to read for a couple of hours in a weekend afternoon. I´ve started A House for Happy Mothers with the same aim in mind, but it turned to be rather the opposite: I kept reading it, because I was interesting in the topic, but the more I was reading the more despicable I was finding the ways in which the topic was addressed as well as the characters.
The House of Happy Mothers is a place in India - one of the many - where local surrogacy mothers are serving overachieved professionals - of Indian origin, but not only. The women accepting to carry and give birth to other people children are very poor and sometimes they would accept to perform this task more than once.
Priya and Madhu are a successful couple from the USA that after several tragical attempts to conceive ended up using the service of a surrogate mother. Priya is half-Indian, Madhu has family living there, and she was the one who actually insisted to follow this path against adoption. "Priya really did believe that by using a surrogate, she was helping a woman who could end up on the street. Someone would have a better life while she got a baby``. As simple as that. And this is how the surrogacy is regarded for 80% of the book. Asha, the surrogate mother in exchange, that was encouraged to do this by her own husband, was hoping that the money will help to offer a better education to her gifted son. `The poverty of their past will stay behind them. Every day would no longer be a struggle. They would be able to buy rice and sugar, the vegetables they wanted and not just potatoes`.
This clear dichotomy based on the distinction rich versus poor is predominant and with the exception of the last pages of the book when most of the characters are becoming better, generous persons. No complexity added to the issue, no intellectual debate. There are allusions made to the emotional trauma the surrogate mothers are going through after the child they carried is taken away, but the voices women who did more than once are telling that most probably this will shall pass and there will be more than one surrogate child carried.
I´m obvious to the fact that indeed, surrogacy represent for women, not only from India, but from countries with a high level of poverty, an investment. As it is equally an investment for the parents who instead of finding a surrogate mother in their own countries - where the legislation allows - prefer to go overseas where the market is cheaper. But I find despicable that this dynamic is just presented as a fact, without a serious critical and in-depth emotional and intellectual approach.

Rating: 2.5
Disclaimer: Book offered by the publisher in exchange for an honest review
Posted by WildWritingLife at 03 April