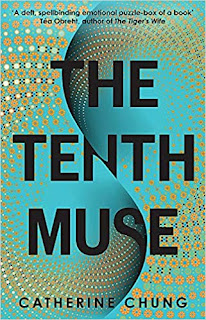 There are not too many books where mathematics are topics of literature, and even fewer with women mathematicians as characters. In a similar way with the neglect and discrimination women suffered in the field of science, math seems to be a very unpopular topic among literati. Unless the author her/himself has a degree in mathematics, as Catherine Chung, author of The Tenth Muse.
The story is narrated by Katherine, who took the risk of becoming a scientist, a mathematician ambitious enough to try to solve the legendary Riemann hypothesis. In the post-war America where she is struggling for recognition, having your full place as a woman in science is impossible. Men can get infatuated with what women are researching, women with scientific dreams can get in the best case scenario unpaid positions. Maria Meyser who discovered the subatomic structure of an atom won the Nobel Prize but was not enough for being featured in the media as nothing more nothing less as a ´San Diego Housewife´.
Katherine is adviced by her father to not ´show´ too much intelligence and knowlege, because it will limit her professional chances - meaning having a job at all, not necessarily advancing professionally. ´If only you were a man´ she is told with pity by men aware of her potential but feeling priviledged because of their gender.
Her relationships with men are problematic for the same reason. One stole her results and once caught by the university teacher assumed that, in fact, he wanted to help the poor girl. Another one considered her a scientist on equal foot until he submitted a paper on her name based on her results that he further developed. He wanted to make her a favor, to offer her a gift of love.
In the end, there is the love for mathematics which will stay with her for the rest of her life: ´Math had always seemed miraculous to be because of the beauty it revealed undelying nature, because of the deep sense of rightness that came over me when I understood something all the way through, as it for a moment I´d merged with the grace I only ever caught glimpses of´.
In the Greek mythology, the tenth muse is the one who wants to talk with her own voice; she will willingly give up her mortality for being able ´to sing what she would´. Katherine is one of them.
The book has more than one story: besides pursuing her career as a mathematician, she is also looking for her real parents. The journey will take her to Germany, where her mother, a Jew and a mathematician as her, fell in love with a student from China during Nazi Germany. In a post-war Germany with an ambigous responsibility towards the past, Katherine will discover a relative, a cousin that actually not only knew her mother, but also stole her research and published it as a theory under his name.
In addition to the story itself, I enjoyed the intelligent dialogues between characters the intellectual background assigned to various parts of the story.
Reading The Tenth Muse change something into the reader: either the perspective on women scientists or on mathematics. Or both.

Posted by WildWritingLife at 12 April