The True Story of a Fake Heiress 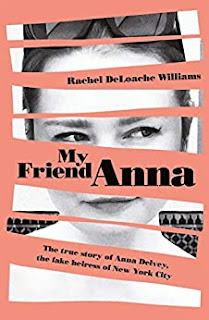 `New York attracts such a wild range of people: artists and bankers, immigrants and transients, old money and new money, people wanting to be discovered and others who never want to be found. But without exception the people have texture, and texture is character, and character is fascinating`.
Among those New Yorkers, Anna Delvey, introducing herself as a German heiress with a millionaire father, an impressive trust fund, expensive tastes but no job. At her crude age of 26, she wanted to open an art center and was faking hard work meeting lawyers and investors. In New York, there are many things that can come true.
At a different level, ´Anna Delvey´ is a glossy version of Elizabeth Holmes from Bad Blood: Secret and lies in a Silicon Valley Startup, a drop-up that was promising a revolution in the medical technology, got the impressive support of top decision makers and a significant amount of funding, but never delivered her promise.
My Friend Anna is the story of a failed friendship between the ´heiress´ and the author, former photo editor at Vanity Fair. Naively mesmerized by Delvey, Williams become her company during her gourmet dinners, expensive spa and shopping sprees. All went well until she accepted to go on a all-paid trip to Morocco where Delvey´s cards started to get declined and she offered - or was invited to offer herself - to pay over 60k for their stay, with the promise of a late reimbursement. Which, in fact, never happened.
Anna - Sorokin, on her real family name, originary from Russia whose family of modest upringing emigrated to Germany - succeeded to steal around 275,000$, mostly unpaid bills and loans. In the end, Williams, one year after being promised to get her money back, become part of the investigation that sent the ´heiress´ to prison.
Both ´Delvey´ and Williams are the victims of their own environment - ´We all want to be included. We crave validation, from friends and from strangers´. The so-called socialite was in fact a lonely girl, unable to interact properly with people from her supposed milieu, a looney with an alcohol problem and some serious mental issues too.
Williams´ memoir - who confesses that at a certain extent wanted to be like Anna, confident, free spirit...how easy those big words can be misleading - has many personal details and can be easily read as a real-life thriller. I would have been curious to find out more about other people that Anna was hanging out, but Williams focused the writing on her own story and the never-ending exchange of messages while trying to recover her money. It was a deliberate choice which limits the understanding of the Anna character. What actually was wrong with this girl?
Maybe there will be a different story about that bizarre con artist one day.