Book Tour: Into Darkness by T.J.Brearton 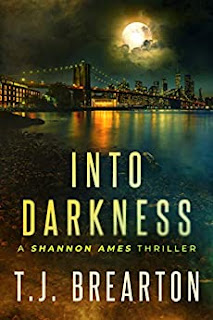 Into Darkness by T.J.Brearton is not a thriller for the faint of heart. Although the criminal is relatively predictable the way in which the story unfolds, from the very beginning is fast forward and doesn´t leave you too much time to breath.
Journalists and influencers start getting killed in awkward ways, following a certain pattern. Is it revenge? Might be some Russian realtors with unclear construction businesses be involved? Mabe the cuprit is some follower of an obscure anti-media secret society?
A serial killer is out on the streets and special agent Shannon Ames (finally a literary choice for a woman in such a position) wants to catch him. She is taking her own professional risks, is tracking the criminal and is able to escape twice her own death. She is not a wonder woman and the victims themselves aren´t special super stars either (except the two influencers whose death was determined by the number of likes they got online). What is then the real motivation of the killer? Is the killer just a psycho or he/she is actualy trying to send a message to the world through each of the killings?
Without revealing too much of the main story and its dramatic ending, I will only mention that the motivation is really personal, might stir a bit of sympathy, although it does not excuse the cruel crimes. The victim the criminal wants to revenge may have been herself a victim of the media culture and its oversaturation with sensationalism which does not protect identity and private choices and overexposes life. But what are, in fact, the limits of private life in a life which is aired online? How could one resist its temptation and therefore the risks of revealing in its full cruel disclosure? How prepare are the young people to assume the risks of their media exposure?
Into Darkness opens an interesting stream of thinking about our media culture and online moments of fame. But this is only the framework of the intense thriler taking place. The actions in themselves do count more than anything else and make into the main focus of the story. Every piece of the story is built in detail, from the setting of the crimes to the ways in which Shannon Ames and her colleagues are tracing down the criminal. The logic of the investigation itself is very interesting, trying to make sense from disparate pieces of information spread towards the crimes as well as the choice of the setting where those are perpetrated, the possible motivation(s) and the profile of the victims.
If you are into thrillers and looking for something a bit different - and an interesting woman investigator character, Into Darkness offers a bookish adrenaline rush.

Rating: 4 stars
Disclaimer: Book offered as part of a promotion blog tour, but the opinions are, as usual, my own.

Posted by WildWritingLife at 15 April